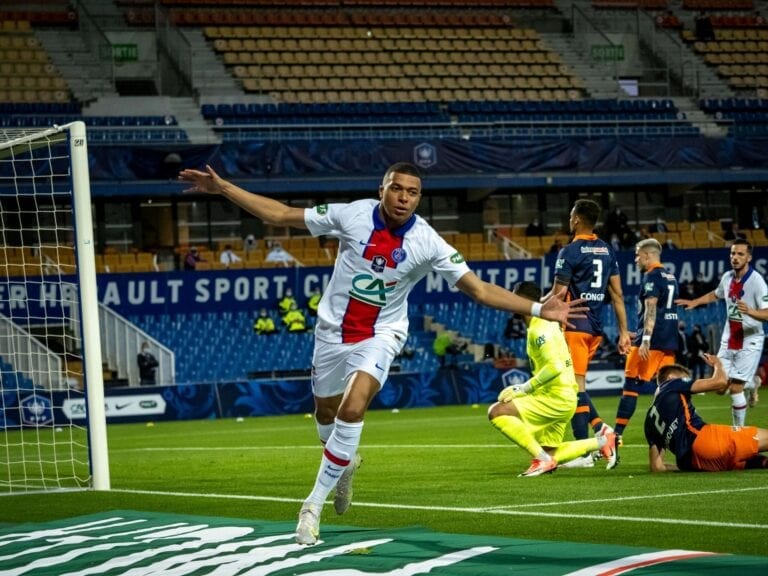 The Frenchman had been out of action for the last two weeks, suffering from an injury which forced him to miss the Champions League semi-final second leg against Manchester City (although he was named on the bench that night).

But he was included in the side that took on Montpellier in their Coupe de France semi-final, and once again showed his brilliance.

With the scores locked at 1-1, Mbappe received the ball on the left flank before carrying it forward in his trademark style.

You can see Montpellier’s Jordan Ferri stick out a leg to try and stop him, but by that point Mbappe has gone beyond him and through on goal.

That was Mbappe’s second goal of the night, but despite leading 2-1 at the time, PSG conceded an equaliser and the game went straight to penalties.

Mbappe had been replaced at that point by Moise Kean, with the Italian scoring the winning penalty as Mauricio Pochettino‘s side advanced to the final.

PSG will take on either Monaco or fourth-tier side GFA Rumilly-Vallieres in the final on May 19.

Mbappe’s goal tally now stands at an insane tally of 39, 25 of which have come in Ligue 1, eight in the Champions League and six in the Coupe de France.

The battle for the Ligue 1 title

PSG must rely on current leaders Lille to drop points if they are to claim this season’s Ligue 1 title.

After their 1-1 draw with Rennes on Sunday – a game for which Mbappe was suspended – they sit three points off top spot with two games to play.

They host Reims and travel to Brest to complete their campaign, whilst Lille have a home fixture against Saint-Etienne before a trip to Angers.

Behind those teams, third-placed Monaco are also mathematically in with a shout if they win both their remaining games and other results go their way.