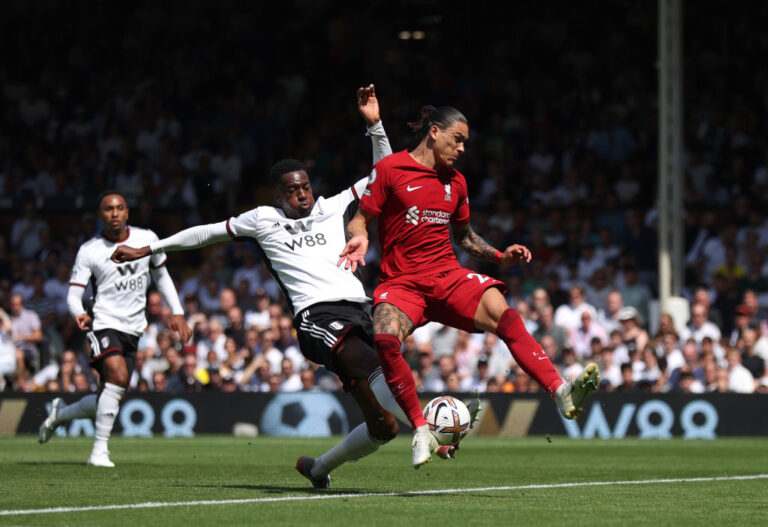 Football pundit Micah Richards believes that huge summer signings Darwin Nunez and Erling Haaland should not be compared yet, as it is too early to tell how the pair will take to the Premier League.

This summer’s transfer window has seen some clubs make massive additions to their squads. Of these, two strikers have stood out: Haaland and Nunez.

Both arrivals will be challenging each other for the title this term. While they do this, the duo will try to adapt to the Premier League for the first time. These similarities have led to fans comparing them, previewing a rivalry between the strikers.

A pre-season test for Haaland and Nunez

Both forwards went head to head in the 2022 FA Community Shield. Haaland led the line for City for the entire match, whereas Nunez was introduced as a second-half substitute.

Their fortunes were very different. Haaland appeared to struggle at times in linking up with the timings of his teammates’ passes and missed a big chance in added time.

Nunez, on the other hand, struck in the fourth minute of added time to make it 3-1 to Jurgen Klopp’s side and put the win beyond doubt.

If this is a rivalry that will emerge, Nunez is 1-0 up.

Micah Richards weighs in on the duo

SPORF spoke to Richards on Thursday at the Sky Sports media day and asked him about the Haaland-Nunez comparison. The former City man believes it is too early to pit the strikers against one another.

“I think this whole Haaland-Nunez comparison is not really a valid one yet,” he said. “Only because like – no disrespect – I watch football, and I only knew about Nunez because of the Champions League [last season]. So that’s the only time. Like no one’s watching the league he was in, let’s be honest. People can watch clips on YouTube, and say, ‘oh my God, Nunez is brilliant.’ But Haaland has been a better player for years!”

The pundit added that he feels both players will take time to adapt at first, but Haaland will cope with the transition better.

“In terms of the players, Haaland’s clear of Nunez up to this point,” he said. “I’m not saying Nunez can’t outdo him in the future, but I think Haaland will have a greater impact.

“It depends on how you define ‘impact’ as well because I think both of them will score goals, but I don’t think both will play amazingly well. Like in terms of, ‘oh my god, he was amazing today.’ Like, watch Haaland in the cup (Community Shield). He didn’t exactly play well, but he could have scored two goals. I think that’s what he’s going to be until both players learn the system, but right now, I think Haaland’s clear of Nunez, and that’s not because of my affiliation with City. That’s just being honest.”