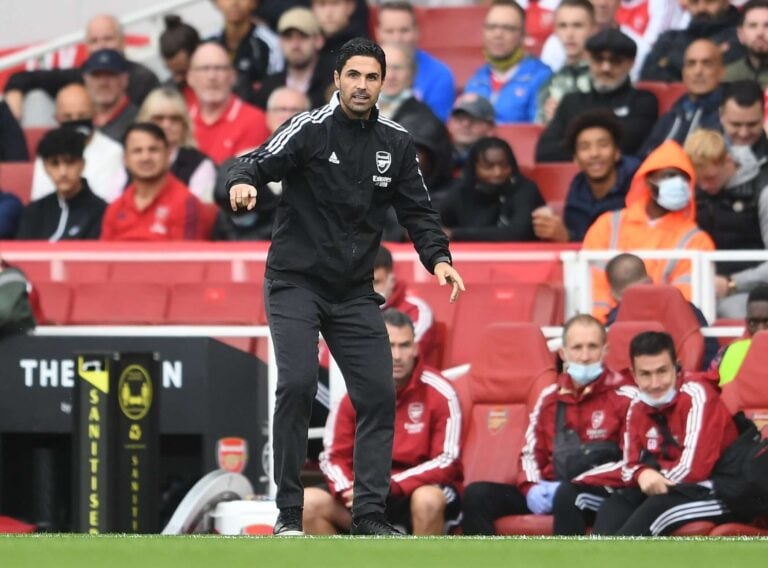 Arsenal manager Mikel Arteta has five games to turn around his side’s form or risk facing the sack, according to a report in the Daily Telegraph.

The report claims that Arteta must show “significant improvement” in those five games to stay in the role, and that if he is sacked, the Gunners could attempt to replace him with former Chelsea and Inter Milan boss Antonio Conte.

Arsenal have endured a torrid start to the 2021/22 Premier League season. They have scored no goals and picked up no points from their opening two games.

They were defeated 2-0 by newly-promoted Brentford on the opening day. On Sunday, they suffered another 2-0 defeat at the hands of London rivals Chelsea at the Emirates Stadium.

Arsenal players were booed off in the latter, after they were outplayed by the reigning Champions League winners.

The side’s form hasn’t been helped by player availability issues that have dogged the club in recent weeks.

Prior to the clash with Brentford, Thomas Partey, Gabriel and Eddie Nketiah were all out with injuries. Pierre-Emerick Aubameyang and Alexandre Lacazette also missed out due to an unspecified illness – later revealed to be Covid-19.

Aubameyang returned to the squad for the Chelsea game and came off the bench. However, Ben White was ruled out due to testing positive for Covid-19. Hector Bellerin was also out due to a thigh injury.

In scoring no goals and losing twice, Arsenal have set an unwanted record for the first time in their total of 118 years in the top four divisions.

The Gunners have spent big in the transfer window – more than any other Premier League club.

Ben White – signed from Brighton for £50m earlier in the month – has been the headline acquisition so far.

They have also completed the signing of Martin Odegaard from Real Madrid, as well as adding goalkeeper Aaron Ramsdale and midfielder Albert Sambi Lokonga to the ranks at the Emirates.

The Telegraph has also reported that Arsenal have “registered an interest” in Atletico Madrid right-back Kieran Trippier.

Who do Arsenal play in their next five games?

Arsenal have been drawn against newly-relegated West Bromwich Albion in the second round of the Carabao Cup – a tie which takes place tomorrow.

Arteta’s side are next in Premier League action on Saturday. They take on reigning champions Manchester City at the Etihad Stadium.

After the international break which follows, they face Norwich, Burnley, Tottenham and Brighton in the top flight.