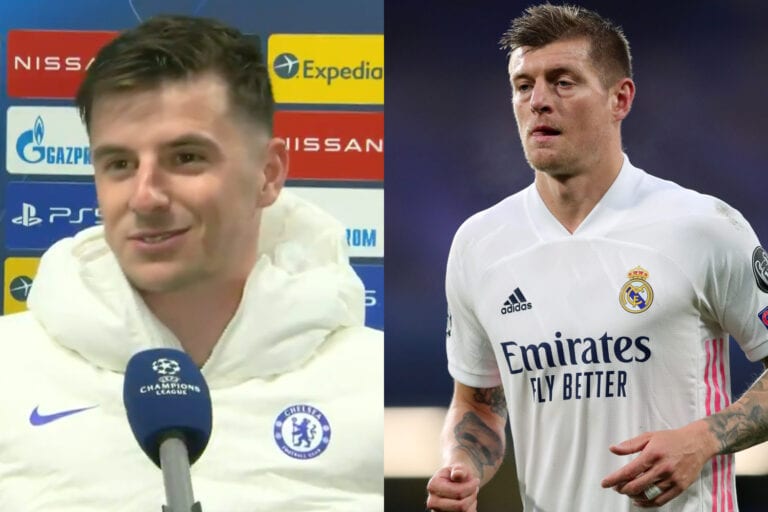 Mason Mount used his post-game interview to respond to comments made by Toni Kroos ahead of last night’s Champions League semi-final.

Mount was one of the goalscorers at Stamford Bridge as the Blues ran out 2-0 victors against Real, cementing their place in the final with a 3-1 aggregate triumph.

Prior to the game Real Madrid midfielder Toni Kroos noted that in his 15 years playing football, he had never lost sleep over the pressure of a game.

It’s worth pointing out, that Kroos did go on to praise the London club as a complete unit.

“They showed in Madrid that they play as a team. They have a German coach so that doesn’t surprise me. They defend well & have pace up front, those are their strengths.”

However, whether or not Kroos meant his comments as an insult, Mount couldn’t resist picking up on them.

"There's nothing like a Champions League Final. You can't replicate that."

Mason Mount on facing City next in the #UCL ?️ pic.twitter.com/06zyu86Wrx

Mount went on to speak candidly about what this achievement, as a whole, means to him.

“I can’t put it into words, really, at the moment.” he said. “But it was a great performance tonight, it was a tough, tough game. You know what they’re like, they’re going to come and they’re going to give it everything.

“The most important thing is that we won tonight. But it’s not over, there’s one more game left.”

The focus now shifts onto what could be a tantalising all-English showdown.

Between Mount and Phil Foden, England’s future generations will be there to battle on the grandest stage in club football.

Kroos, on the other hand, has the LaLiga title race to focus on.