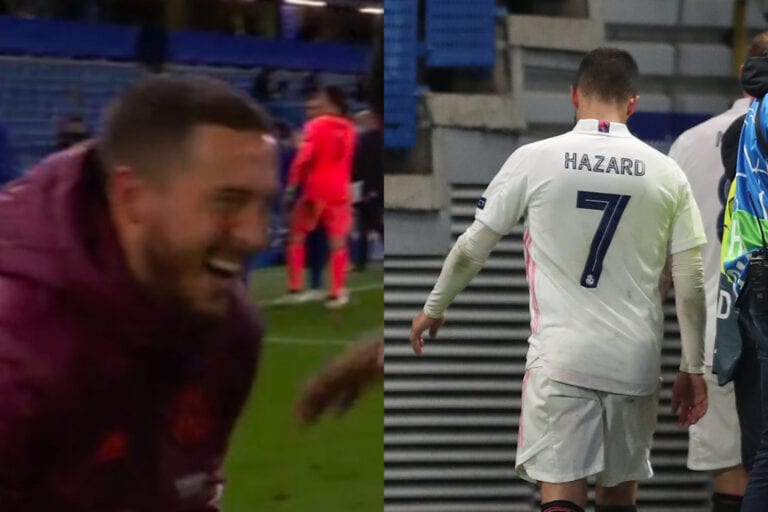 Eden Hazard made just his third Champions League start of the season against Chelsea on Wednesday night.

The Belgian midfielder has endured a torrid time with injuries since joining Real Madrid from their semi-final opponents in 2019, and has scored just four goals in all competitions for the club as a result.

He was awarded a start by Zinedine Zidane against the Blues, but it wasn’t quite the night Hazard or Real were hoping for.

Real had early chances, with Karim Benzema bringing a stunning save out of Edouard Mendy with a curling effort. But when Timo Werner put Chelsea ahead on 27 minutes, the momentum shifted firmly in their favour.

Hazard himself drilled in a shot that was well saved by Edouard Mendy in the second half but the tie was decided late on when Mason Mount put Chelsea two goals ahead and 3-1 up on aggregate. In truth, the Blues should have won by a much larger margin.

After the game, he was seen laughing with Chelsea defender Kurt Zouma, whom he played alongside at Stamford Bridge for five years.

It’s safe to say that the Spanish press weren’t particularly impressed after seeing that.

In fact, the first 15 seconds of the below clip, from football chat show El Chiringuito, tells you everything you need to know about what they in particular thought of the pictures.

The show referred to Hazard as “another Bale” – although Bale did of course score four goals in Champions League finals for Real.

They then ran a poll on their Twitter account asking whether the club should sell Hazard this summer. Over 20,000 people have voted ‘no’ at the time of writing, but plenty more have an opposing view, with 16,000 voting for ‘yes’.

A quick scroll up their Twitter feed from that moment on shows that almost every video they posted from the chat show last night revolves around Hazard.

Spanish publication Sport’s back page centred around a photo of Real captain Sergio Ramos, whilst Marca showed Werner’s header which put Chelsea ahead on the night.

Overall, it was a night of incredible disappointment for Real, who must now win LaLiga if they are to avoid going trophyless this campaign.

Chelsea, meanwhile, will face Manchester City in the Champions League final on May 29.