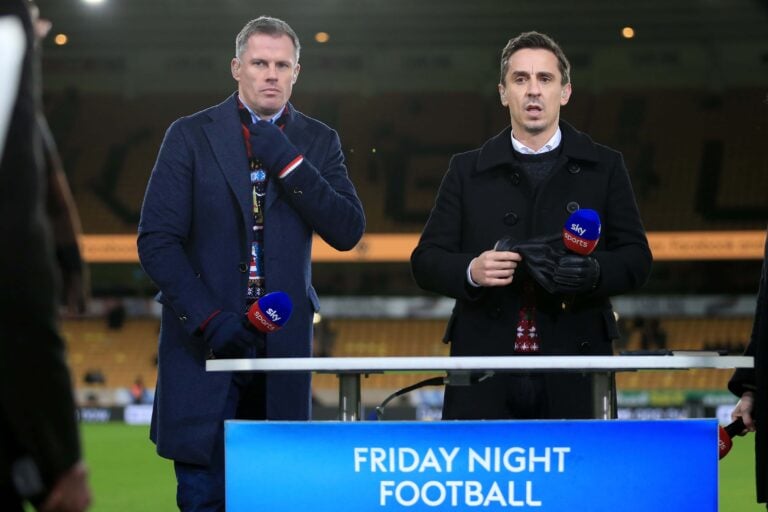 Gary Neville and Jamie Carragher have chosen their combined Liverpool/Manchester United XI’s ahead of the two teams facing off in Premier League action on Sunday.

Manchester United will go into the clash at Old Trafford off the back of a three-game winless run in the Premier League. Ole Gunnar Solskjaer’s side are currently sixth in the table on 14 points.

Jurgen Klopp’s Liverpool, meanwhile, are in second place on 18 points from eight games. They are yet to taste defeat in the league this season.

On Monday Night Football, Neville and Carragher picked their combined XIs ahead of the blockbuster fixture.

The former United defender explained: “With Salah and Mane, I thought [Ronaldo] should be up front in the two teams. I think you would have him up front because I think that ultimately in that type of team, with Fabinho and Henderson behind, with Firmino behind and those two wide, he would be absolutely devastating.”

“[Firmino] was the most difficult one. I refuse to disrespect Firmino and what I’ve seen for four or five years. That front three [Liverpool] has been out of this world, and he is always is the one who seems to get pushed away. But the work in possession and out of possession that he does on behalf of the team is unbelievable.”

The former Liverpool defender explained: “In the last 12 months, going back a little bit further, I’d have put Harry Maguire in there. I’m a huge Harry Maguire fan – he’s a really good player.”

“I actually think Joel Matip has probably been better than Virgil van Dijk this season, and he’s a player that goes under the radar because he’s not a huge name, he’s come in on a free transfer, he’s been there a long time, he’s had injury problems. But every time he plays, he’s top class.”

“It was always going to be Salah, Mane and one other [in the XI]. I’m a massive Greenwood fan – I think he’s a superstar, I really do. Listen, how can you not put Ronaldo in, in terms of what he’s done, a legendary figure, but I’m talking about right now, today. I’d have to have Greenwood.”

Manchester United take on Liverpool at Old Trafford on Sunday, with a 4:30pm kick-off.