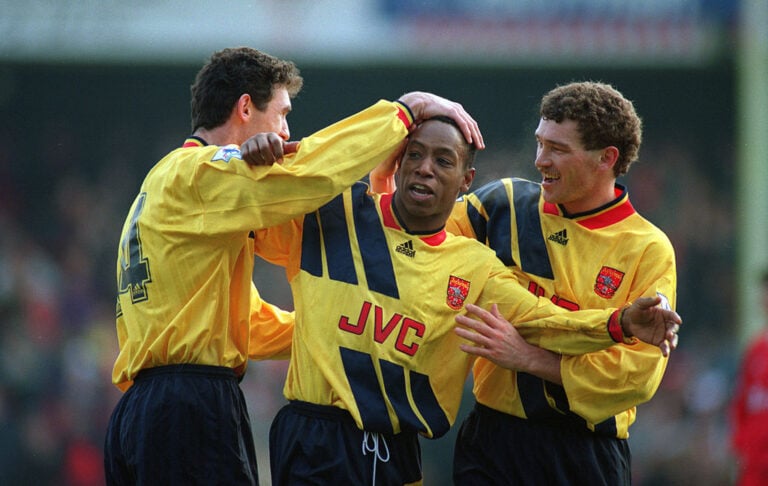 Christmas is a time for giving, and there aren’t many better ways to make a loved one happy than buying them a retro shirt.

Arsenal have teamed up with renowned clothing brand adidas to create an advert involving their own retro shirt to get fans in the festive mood.

What happens in the commercial?

The video pans over a snowglobe before a record player plays light-hearted music. Enlarged writing then appears on screen with the marketing campaign’s tagline – ‘Good Things Never End’.

Some rival fans will, of course, argue with that point of view, but supporters at the Emirates will likely enjoy this nostalgic message.

The video then progresses to a montage of Arsenal players, including Aaron Ramsdale, Kieran Tierney and Leah Williamson, doing various activities, such as playing with cards and Rubix cubes. However, fans may find Bukayo Saka cuddling an adorable brown dog the most heartwarming part of the advertisement.

This is then followed by Emile Smith Rowe enjoying what looks like a romantic phone call. But sadly for the midfielder, his conversation is cut short when one of his teammates snaps the phone wire.

The German company didn’t just want to treat fans to a selection of their current stars. As the video is about to end, adidas then reveal one of the biggest legends to have ever played for the London club.

Ian Wright arrives on screen before the big letters return with a closing message – ‘The End?’ Just the Beginning’.

Arsenal fans will certainly hope that this is the case.

How are the Gunners playing this season?

The Emirates was anything but a theatre of positivity at the start of the season. Mikel Arteta’s side shockingly lost their first three fixtures in their worst start to a campaign in 67 years. Not only were they handily beaten by Brentford and Chelsea, but they also suffered an embarrassing 5-0 defeat to Manchester City.

As per the Daily Telegraph, Arteta was given five games to save his job after the City loss. But since then, he has managed to turn things around. His side have clawed themselves up to seventh in the league and look likely to have a good second half of the season, despite their disappointing 2-1 loss against Everton on Monday.

An old-school Arsenal shirt will undoubtedly be the perfect present for Gunners fans to open on Christmas morning. But most supporters will only have the perfect holiday season if their team performs on the pitch as well.