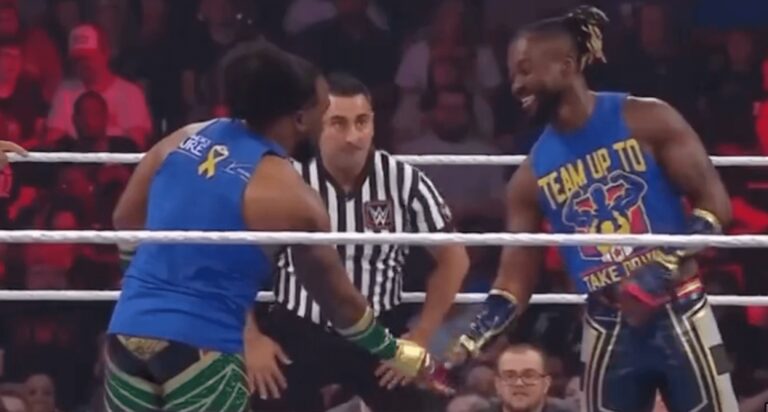 The New Day have always given WWE fans some extremely entertaining moments. And on Monday Night Raw, they well and truly pushed the limits.

The tag team have long been considered one of the best of all time. Three individuals who have completely different wrestling styles, they have all the ingredients to make the perfect trio.

Although they fool opponents with their humourous demeanour, from Kofi Kingston’s high-flying manoeuvres to Big E‘s power, they have all the tools to beat every opponent they come up against.

And on the latest edition of Raw, they proved just how crafty they can be. They collided with Los Lotharios, Alpha Academy and The Street Profits in a Fatal-4-Way match to determine the number one contender to the Tag Team titles.

And in a moment of pure comedic gold, Kingston and Xavier Woods ended up as the two legal men in the ring. Therefore, they utilised their extensive experience to try and sneak a quick victory. Woods dropped to the floor and allowed his teammate to pin him. However, their plot was spoiled, as every other superstar dived into the ring to prevent the three count.

But despite their epic attempt at securing the win, a returning icon emerged to throw the match on its head.

After being released last year, ‘The Monster Among Men’ spent his time away from the company planning his comeback to wrestling. And he certainly made an impact when he made his return to the WWE ring.

The giant’s music blasted out into the arena to a massive cheer from the crowd. And unsurprisingly, he wiped out every man in his path, including the security guards who tried to slow him down.

He brutally attacked Chad Gable, before sending Humberto Carrillo to the mat with an insane chokeslam. Strowman then beat up security guards, before wiping out Otis through a barricade and slamming Angelo Dawkins through the announce table.

So now the powerhouse is back, there’s no way of knowing just how much carnage he’s about to cause.