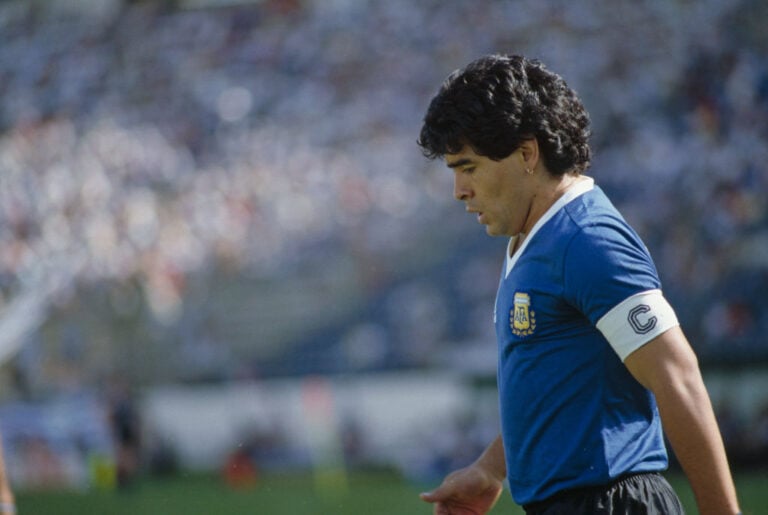 A new Diego Maradona statue has divided opinion among football fans and the artistic community.

One of the greatest footballers of all time, the late Argentinian icon has a legacy that transcends the game of football. Maradona played at Napoli, Barcelona, Sevilla, and Boca Juniors throughout his career.

At the peak of his powers in Italy, the Argentine won a UEFA cup, two Serie A titles, and a Copa Italia. Before this, Maradona claimed a Copa del Rey and Supercopa Espana at Barcelona.

However, it was on the international stage that Diego Maradona established his legend. He led Argentina to glory at the 1986 World Cup, winning the golden ball as the player of the tournament. The attacker finished his career with 90 Argentina appearances, scoring on 34 occasions.

His incredible career brought individual acclaim as a result. At the turn of the millennium, Maradona won the award of the FIFA best player of the 20th century – an honour he shared with Pele.

Due to his massive impact on the global game, Diego Maradona had many statues and pieces of art made in his honour. But some are certainly better than others, the most recent unveiling dividing opinion.

This latest bust was unveiled ahead of a match between Argentina U20 and Valencia at the Els Arcs stadium in Valencia. It was part of a tribute to Maradona at the COTIF U20 International tournament.

In a group stage game of the tournament, Argentina U20s beat a Valencia academy side 2-0. They should therefore be through to the latter stages of the competition.

AFA President Claudio Tapia proudly attended the unveiling that paid respect to his country’s hero. Although he may have been happy with the result of the match where the statue was presented, Tapia may not be impressed with the statue.

Local artist Rafael Ferri created the project, which is a statue of the upper portion of Diego Maradona. Curiously, the face of the bust has very limited distinguishable features. Because of this, the stand-out element that suggests the statue is, in fact, Maradona is the black perm hairstyle.

In addition, the jersey that the statue “wears” is not the traditional blue and white Argentina stripes. Alternatively, the artist has gone for a plain, sky-blue jersey with a cloudy pattern.

Overall, it appears to be a very original piece of art. Unsurprisingly, social media had varying opinions on this latest statue honouring Diego Maradona.

Reddit soon caught wind of this new bust. After viewing some images, certain people were very dismissive of the artist’s efforts to be unique.

“It’s the thought that matters,” quipped one Redditor humorously.

“The idea is good, execution not so much,” joked another.

Meanwhile, others jumped to the defence of the choice of the artist. After all, art is subjective; even if it is a statue of someone, it is still open to interpretation.

“It’s definitely stylistically designed to be this way,” said one user. “Not every statue/bust must look life-like. It could look a bit more like him, though. And I personally don’t dig that it looks like Papier-Mache.”

Similarly, a couple of people actually liked the unique bust.

“I like it,” admitted a commenter. “It’s a bit weird and impressionist, but it has a style to it. Statues don’t have to be 1:1 with the real thing.”

As they say, beauty is in the eye of the beholder. One thing that fans did agree on was that it was still better than the now-iconic Ronaldo bust from a few years ago.

Despite the divided views, this statue is certainly a unique tribute to an all-time great.