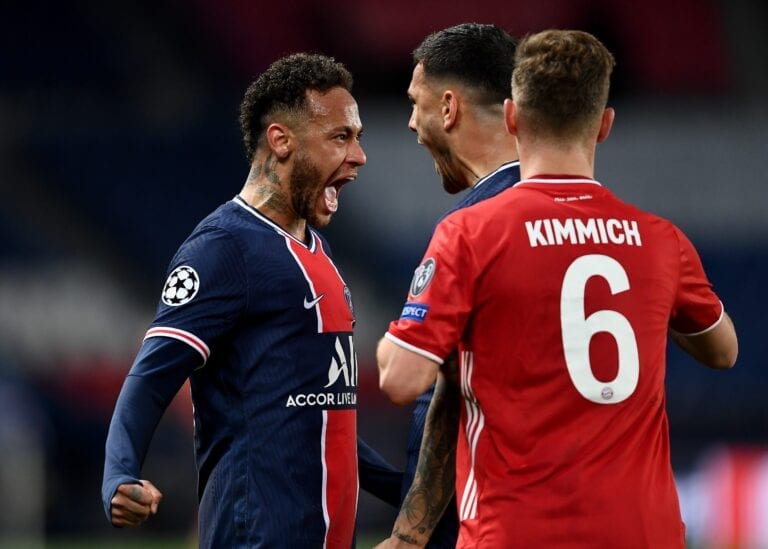 Neymar has said that he intended to celebrate with Leandro Paredes last night and not in front of Joshua Kimmich, though couldn’t resist hedging his comments with a thinly-veiled dig at the Bayern man’s pre-match comments.

Paris Saint-Germain progressed to the Champions League semi-finals for the second consecutive year, despite losing 1-0 to Bayern Munich in the Parc Des Princes.

They went through on away goals, thanks to a stunning 3-2 victory in Germany a week ago.

Despite being on the losing side, however, Neymar was one of the second leg’s star performers, hitting bar and post and causing a threat to the visitors all night.

After the full-time whistle, he turned and celebrated with Paredes – right in the face of Bayern midfielder Kimmich.

PSG go through to the #UCL semi-finals and you can see what it means to Neymar and Mbappe! ? pic.twitter.com/qK4Qhtj59h

But Neymar has insisted that he didn’t intend to celebrate in front of the German international, and instead simply wanted to enjoy the success with his teammate.

However, he did bring up comments made by Kimmich before the game, in which he said he was confident his side could progress.

He explained (via TNT Sports Brasil): “It’s funny because I didn’t even celebrate to mess with him, it was more with Leo and I ended up celebrating with him.

“It was fate that put me close to [Kimmich].

“He said that their team was better, that they would win.

“He was sure that they would go to the semi-finals.”

“You can have possession as much as you like. You can sing for a woman all night long, but if a guy comes and takes her from you in 5 minutes, she’s gone”

Despite having 21 shots at goal in the first leg – with each outfielder having an opportunity of their own – Bayern went into the second leg behind on aggregate.

PSG’s three goals that night all came through brilliantly-crafted counter attacks. Kylian Mbappe was chief destroyer on the night with two goals.

Last night’s second leg wasn’t full of goals as we perhaps expected -but it was a fascinating game to watch.

Neymar seemingly did everything but score in the Parcs Des Princes last night.

He received the Player of the Match for his display, which caused Bayern defenders no end of problems.

He also nearly scored what would have been one of the goals of the season in the Champions League.

PSG will now face either Manchester City or Borussia Dortmund in the semi-finals of the Champions League, with the first leg taking place on April 27.