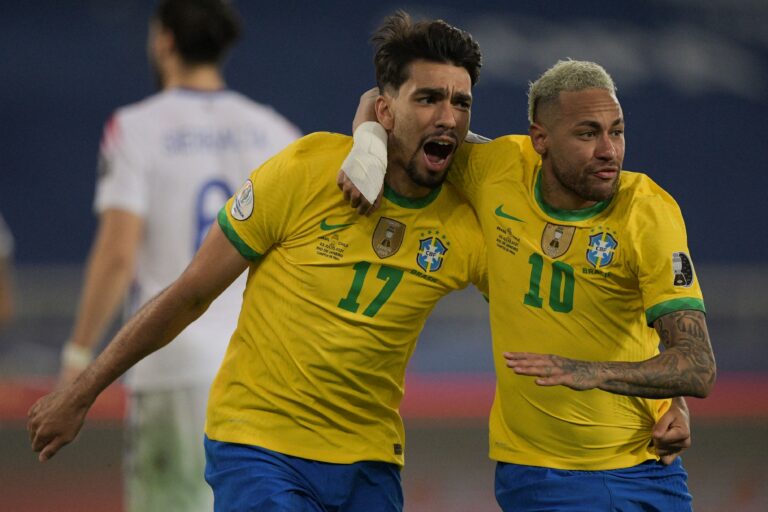 Paris Saint-Germain winger Neymar has expressed his disappointment at international team-mate Lucas Paqueta appearing to be shown a yellow card for an attempted rainbow flick.

Paqueta tried the skill during a Ligue 1 fixture between his side Lyon and Troyes on Wednesday evening.

He flicked the ball up into the air, but the ball came off the body of a defender. Paqueta initially appealed for what looked like handball, but he was on the receiving end of a caution instead.

The booking, which occurred in the 92nd minute, caused plenty of controversy.

He wrote on Instagram: “Very sad this episode, taking a yellow because of a dribble… Honestly I don’t understand the reason!!! The famous “beautiful game” is ending…”

Paqueta played the full game, and scored the third goal in Lyon’s 3-1 victory on 87 minutes.

The 24-year-old scored his fourth goal of the Ligue 1 season. Last term, he struck on nine occasions and provided five assists as Lyon finished in fourth position.

Speaking to OLTV after the Troyes victory, he said: “It is trust that is important. Today I am very happy in my life and at the club.

“This support, this warmth from everyone, from the supporters makes me feel good and play my best football.

“I feel a little tired but we are doing a good job of recovering; we will give our best on Saturday night.”

Peter Bosz’s side currently sit in sixth place in Ligue 1, having recorded 11 points from their opening seven games.

They began their season by failing to win their opening three league fixtures, before defeating Nantes 1-0 for their first victory of the campaign.

Lyon then recorded three wins in their next four matches, including a 2-0 away win at Rangers on the opening matchday of the Europa League.

They are next in action on Saturday when they take on Lorient at Parc Olympique Lyonnais.