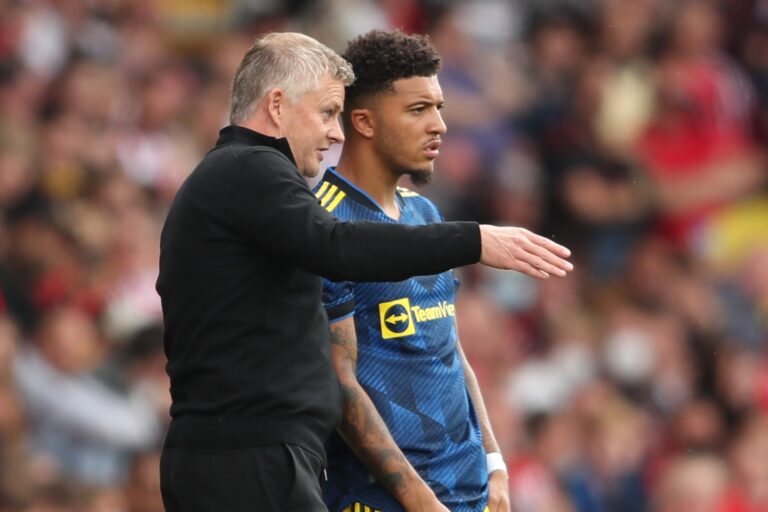 Manchester United manager Ole Gunnar Solskjaer has given his thoughts on why Jadon Sancho hasn’t quite been at the races since joining the club.

Back in the summer we saw Sancho finally make his long-awaited switch from Borussia Dortmund to Manchester United after what felt like years of speculation. He made the transition during the same transfer window that featured both Cristiano Ronaldo and Raphael Varane also making their way over to Old Trafford.

Where can Sancho improve?

While Ronaldo and Varane have largely gotten off to positive starts, Sancho hasn’t quite been at the races having failed to register a single goal or assist so far this season.

In the wake of United’s loss to West Ham in the Carabao Cup, which featured both Sancho and Donny van de Beek performing below expectations, Solskjaer was asked about what’s going wrong for the pair.

“I can’t complain about the effort. It has something to do with the rhythm. The confidence. Their best form isn’t there, as they haven’t played much.

“Good for them to get time, but we didn’t get the result. So like I said, there was a bit lacking in terms of quality, but not in terms of effort.”

Solskjaer is rightly going to protect his players from criticism at the earliest available opportunity but there are definitely some valid concerns in play here. The Norwegian is right in suggesting that Jadon may not have had much time to settle in but if this form continues into the winter, changes may need to be made in the starting XI.