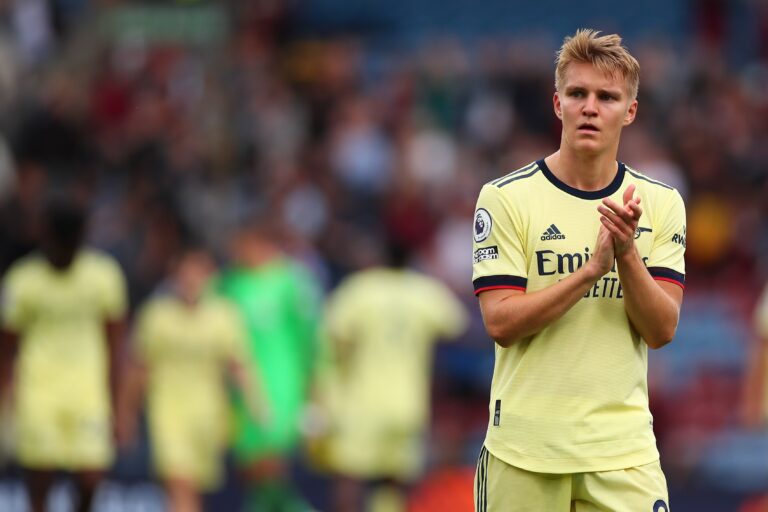 Arsenal midfielder Martin Odegaard has discussed his spell with Real Madrid in an interview with a Norwegian TV station – and says that his current club have a “very nice dressing room”.

Odegaard joined Arsenal from Real in the summer on a permanent transfer, having spent the second half of last season on loan at the club.

Since missing the game against Chelsea due to visa issues, the midfielder has started each of Arsenal’s five Premier League fixtures since.

He scored the only goal of the game in their 1-0 victory over Burnley on September 18, netting a free kick from just under 25 yards.

Speaking whilst on international duty with Norway, Odegaard spoke about some of the difficulties he faced at Real, where he spent six years after signing from home club Stromsgodset in 2015.

Most of that time was spent out on loan, with the Norwegian making just eight appearances for the Real senior team.

He told Norwegian TV station TV 2 (quotes via AS): “When you’re at the highest level, it’s not that easy to make friends and that kind of thing. At least not when you’re young and coming from somewhere else. Sometimes it can be difficult.”

“It is not easy to integrate into the core of the locker room. You live a little bit of your life outside. You become more lonely.”

“It may not be the locker room culture I was used to at the Stromsgodset. It’s different. But that has made me stronger and I’m very happy and glad to have lived it.”

Odegaard then went on to outline one of the differences between Arsenal and Real Madrid.

He said: “I would say [the difference] is big. I think it’s like that in the bigger clubs. It gets all a little bit more scattered.”

“I’m very happy where I am now at Arsenal, who have a very nice dressing room.”

Odegaard and Arsenal are next in action on October 18 when they host Crystal Palace at the Emirates Stadium.