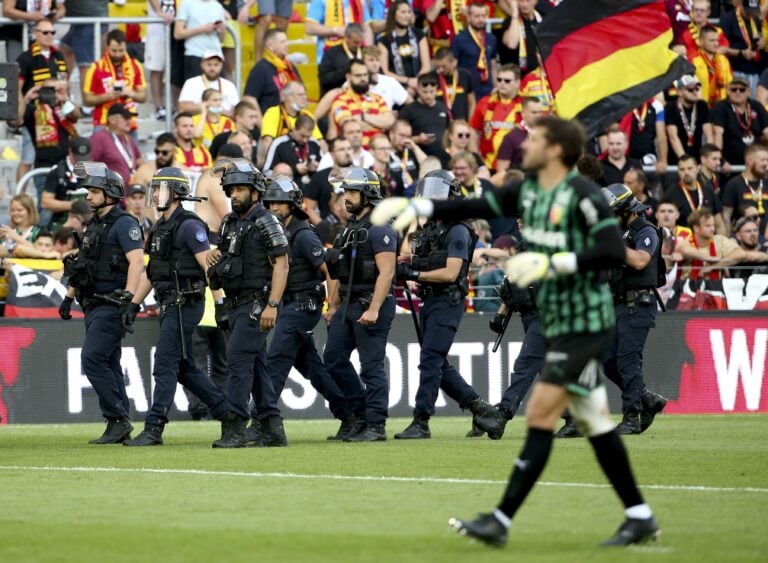 Ligue 1 clubs Lens, Lille, Angers and Marseille have each been handed penalties by the French Football Federation (LFP) after fan incidents that have marred the top division in recent weeks.

Lens have been given a suspended one-point deduction and must serve two games behind closed doors – which they have already served.

Lille and Marseille, meanwhile, cannot have away fans in any ground until December 31, and have each been given a suspended one-point deduction.

Angers have been handed a €20,000 fine and must play two home games behind closed doors.

What incidents caused the sanctions?

The punishments are linked to two major incidents involving away fans, which occurred during Lens v Lille and Angers v Marseille last month.

The former was marred by crowd trouble, with a number of home fans entering the pitch from one of the stands. They then stormed towards the Lille fans, causing riot police to get involved.

In addition, a Lille supporter was reportedly set to be prosecuted for “sexual exhibition” after the incident.

In the Angers/Marseille fixture, Angers supporters reportedly set off firecrackers towards the away contingent during the game. Marseille fans then stormed onto the pitch, with security again required.

They are not the first occasions that Ligue 1 clubs have been involved in crowd trouble this season. Last week, Marseille were fined €60,000 and forced to play a game behind closed doors after a number of their supporters used pyrotechnic devices during a fixture against Stade Rennais.

In Ligue 2, AS Nancy were forced to close one of their stands for the next game. Their supporters were deemed to have made discriminatory remarks.

Marseille’s Europa League fixture against Galatasaray on September 28 was temporarily suspended after fans from both clubs threw “pyrotechnic items” onto the pitch – and at each other.

Meanwhile, in a fixture between Nice and Marseille in August, OM midfielder Dimitri Payet was struck in the back by a bottle thrown from a home supporter. He then picked up one of the bottles and threw it in the direction of the stand, which led to Nice fans invading the pitch and ensuing a brawl.

Nice were handed a three-game spectator ban for the incident, whilst Payet got a suspended one-match ban. Marseille physio, Pablo Fernandez, was given a nine-month touchline suspension for his part in the brawl.