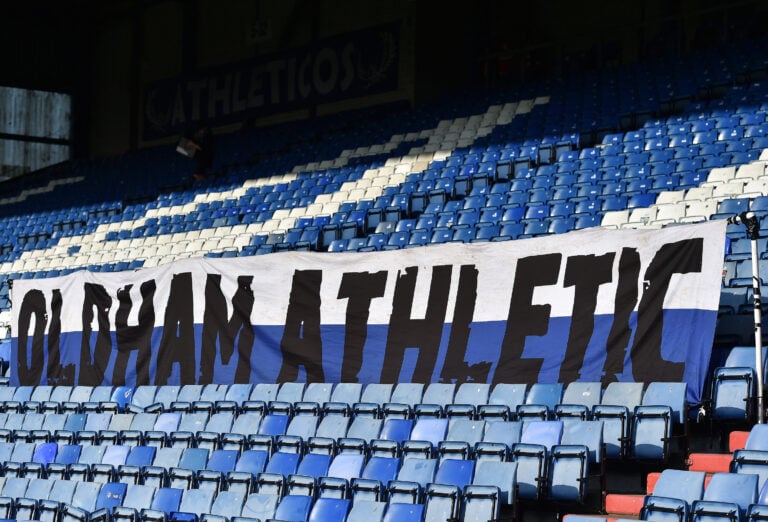 In what is a remarkable story, Oldham Athletic fans have now invaded the pitch in four of the club’s five competitive games at their home stadium, Boundary Park, this season.

As well as invading the pitch on several occasions, fans also threw tennis balls and a flare onto the pitch during their Carabao Cup tie at home to Accrington.

The pitch invasions have been taking place in protest at the club’s owners, the Lemsagam family.

When did the Lemsagam family take over Oldham?

Abdallah Lemsagam, who acts as Oldham chairman, bought the club from previous owner Simon Corney in 2018.

Corney initially was involved in a partnership that took over the Latics in 2004, saving them from possible liquidation.

The businessman then became the club’s majority shareholder, and the club remained in League One throughout his stewardship.

Since the Lemsagam family took over, Oldham have been relegated from the third tier and been through eight managers. Of those eight, three lasted under 12 matches.

The club also faced a winding-up petition last year, which was dismissed by a judge after its debts were cleared.

The family own 97% of the shares in the club, with the other 3% belonging to the Oldham Athletic Supporters’ Federation – who want answers.

They called for a meeting with the Latics board earlier in August, calling the communication from the club’s owners “insufficient”.

The Supporters’ Federation, along with the Push the Boundary group, said in a joint statement: “Given the trajectory of our club under the custodianship of Mr Abdallah and Mohamed Lemsagam, it is now up to them to openly discuss the very serious concerns of the fans directly.

“We legitimately fear that the next phase for the football club is likely to be administration and relegation from the EFL, for the first time in our history.

“As fans, we cannot allow this happen unchallenged and must insist that if you cannot immediately demonstrate a sufficient plan of action, that you must officially put the football club up for sale with immediate effect.”

According to BBC Sport, a deadline of August 31 was set for the owners’ response. The OASF released a statement yesterday confirming that a meeting did take place yesterday between the foundation and both Abdallah Lemsagam and club director Adam Moralee.

Keith Curle’s side defeated Sutton United – the only team below them in the table – last weekend to record their first points of the season.