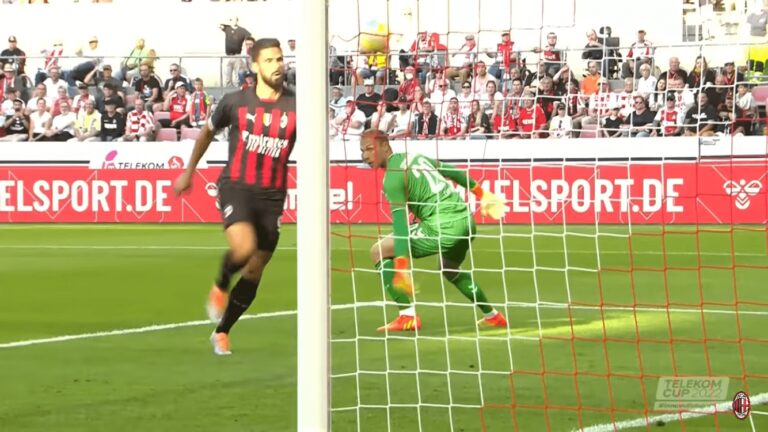 Olivier Giroud has scored many a beautiful goal in his time, and on July 16, he added a few more to the collection with an unbelievable brace.

Since leaving the Premier League, the Frenchman has found a new lease of life. In 2021, he signed for AC Milan and helped the Italian giants pick up their first Serie A victory since 2010-11.

Having maintained his ability to hold up the ball, create play and fire the ball towards goal with thunderous power, Giroud spent last season scoring for fun. He utilised his physical strength en route to 14 goals in 38 appearances.

But while the atmosphere at the San Siro remains in high spirits, it’s important that Milan continue their momentum into the upcoming campaign. And after their striker’s goal on Saturday, that shouldn’t be a problem.

During a friendly against Bundesliga side Koln, the forward left a packed crowd speechless with a moment of footballing magic. In the 16th minute, Milan made a move into the box and following a sublimely executed back-heel from Ante Rebić, Giroud chipped the ball over a helpless Marvin Schwäbe before firing it into the back of the net.

However, his time in lights wasn’t quite over yet. Brahim Diaz found the prolific goal scorer on the edge of the box, and Giroud didn’t disappoint. He curled the ball into the top left-hand corner with laser-like precision to double his side’s lead.

The goal looked even better on the action cam

The incredible angle captured the moment in all its beauty. The point-of-view camera highlights Giroud’s astonishing movement and positioning before he ultimately dunked the ball over the keeper and into the goal.

The aim of an action cam is to allow the viewer to dive right into the sports they love the most. It captures immersive shots in a way that the average iPhone or camera simply couldn’t do.

And what better to capture than Milan’s frontman bagging one of the best goals you’re ever likely to see?