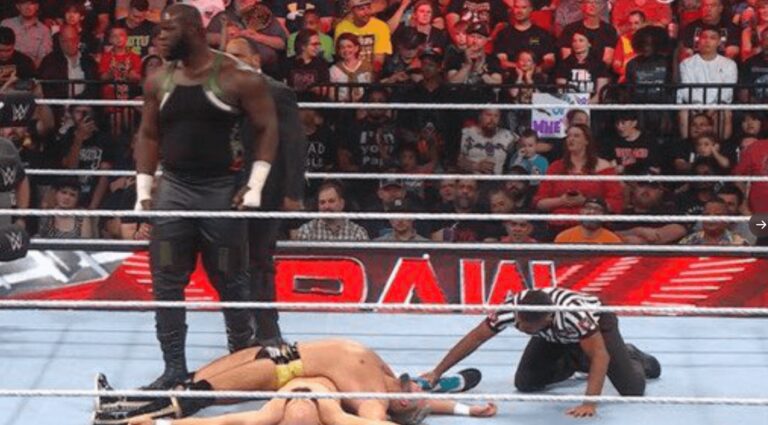 Omos returned to action on the latest episode of Raw – but many WWE fans missed the entire match.

Fans hadn’t seen ‘The Nigerian Giant’ since August 8, when he defeated two local competitors in a squash match.

This week, he was back, alongside his manager, MVP. The 7ft 3in giant walked out into the arena, and began to make his way to the ring.

That, however, was the most WWE fans saw of Omos during the show. As he made his entrance, technical malfunctions cut the screen to black on the USA Network.

The same happened on BT Sport in the UK, with the BT Sport logo showing on-screen instead of the live action.

By the time the live footage returned, Omos was having his hand held up in victory. Of course, Twitter users all made the same joke.

What happened during the match?

The technical glitch didn’t affect everyone, as a small number of fans were able to watch the action on other networks. But, for the vast majority of fans, it looked as if the fabled Omos match was to vanish into the atmosphere, never to be seen.

No footage of the Omos squash is even available on WWE’s YouTube channel yet. For now, all we know is that ‘The Nigerian Giant’ won relatively quickly, with both his opponents laid out on top of each other – with no idea how they got there.