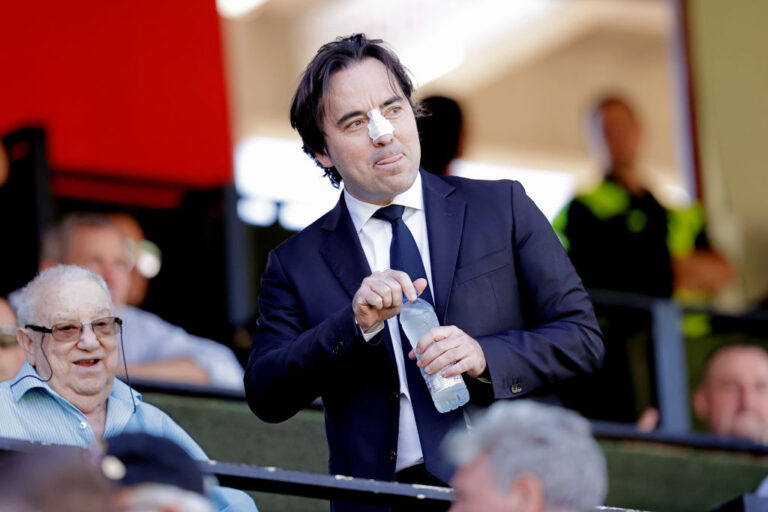 Rayo Vallecano president Raul Martin Presa has claimed he received a headbutt by agent Ivan Garcia during negotiations over the potential signing of striker in the signing of Raul de Tomas.

The Spanish striker has impressed during his time at Espanyol with his terrific awareness and eye for goal.

During his time at the club, the 27-year-old has bagged 45 goals. He netted 17 times last season. This has captured the attention of clubs all over Europe.

He even caught the eye of Manchester United‘s Erik ten Hag. The Dutchman considered bringing the player to Old Trafford.

But in the end, it was Rayo Vallecano who made the breakthrough. The side have nearly completed negotiations with Espanyol and the player’s agent. However, it seems that the discussions were anything but plain sailing.

The Vallecano president had to go to the hospital after the meeting. Pictures are surfacing of his injured nose.

Presa explained to Partidazo Cope: ‘It was a completely unexpected headbutt. It was the action of criminal, a very cowardly action and a very s***** action. Because if he gives me warning, then we fight.”

Rayo have since written a statement on the matter. It reads: “It is radically false that Raul Martin Presa assaulted Ivan Garcia.

“Ivan Garcia assaulted Raul Martin Presa by headbutting him in the face, late at night on Thursday.

“Precisely for being assaulted, Raul Martin Presa called the police, went to Accident and Emergency at a medical centre in order to receive medical assistance, and, immediately, made a formal complaint against Ivan Garcia to the police department.

“The diffusion of the fake news yesterday that we here have denied is a weak defence strategy from Ivan Garcia in the face of the legal issue he is facing.”

However, regardless of the fiasco, it appears De Tomas will join Rayo for a fee of €12 million, as per Spanish outlet Mundo Deportivo. He will be available to play for the club from January. De Tomas has not played so far this season due to injury.