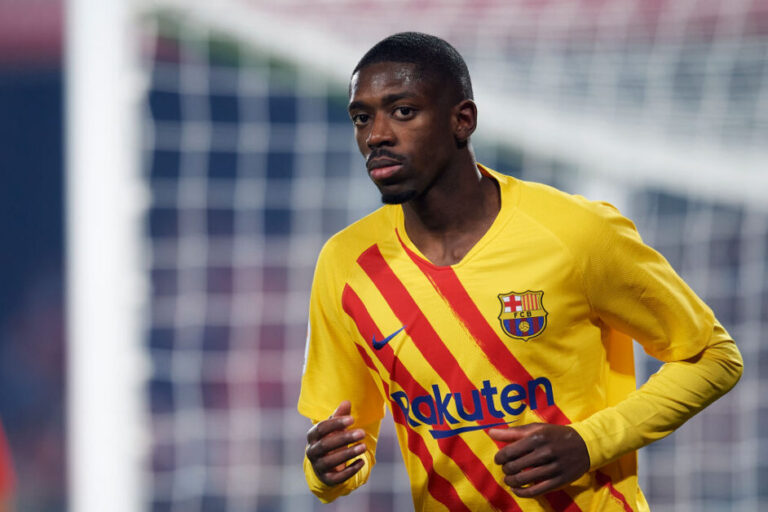 The contract dispute between Ousmane Dembele and Barcelona continues.

Barcelona tried to apply pressure on Dembele through the media for several months. They portrayed him as greedy, unreasonable and ungrateful. They wanted him to either sign a new deal, preferably with a pay cut, or leave. Dembele refused.

From the player’s perspective, he was worth more money than Barcelona offered. Many reports claimed they wanted Dembele to accept a reduced wage. The France international was not about to do that. The narrative that Barcelona are broke doesn’t wash if they’re signing players like Ferran Torres for huge fees.

Regardless of appearances to outsiders, the club made their most entitled move on Thursday. Sporting director Mateu Alemany spoke to club media about the situation, saying Dembele didn’t want him to stay – because he had yet to sign a new deal – and Barcelona only wanted players committed to the club.

He said: “We started negotiating with Ousmane’s agents some six months ago.

“We have been in constant contact with them since regarding the club’s position, stating that the club wants the player to remain.

“He has been offered different deals. We have been on top of the situation. I believe it’s been long enough for the player to decide where his future lies.

“There are 11 days left in the January transfer window for registering players. Our understanding is after this lengthy process, the player has decided he wants to leave, and clearly, we have informed him that we want players who are committed to Barca and Barca’s future.

“He should probably leave as soon as possible both for his own good at Barca’s good. He has been informed as such, and based on that, the coach’s technical decision is in line with the club’s position and how things have progressed.”

This pushy approach was met with unanimous disapproval.

Plenty of onlookers were quick to offer their support after Alemany’s comments.

The Spanish Footballers’ union, AFE, warned Barcelona that what they were doing was illegal. Dembele has a contract, which the club can’t tear up on a whim.

Their statement said: ‘It’s true that a professional footballer has no [automatic] right to be picked to be in the squad for all games, but he does have a right to be treated the same as his teammates.

‘If the situation [being left out] can be understood as a pressure on him [to sign a new deal or leave] and in addition, there are public statements acknowledging this type of pressure, we would be dealing with an illegal action on the part of the club.’

Dembele’s contract expires in June 2022. Negotiations between him and the club hit a brick wall repeatedly over the last few months. Barcelona signed Dembele in 2017 for £135.5m, and his spell has been underwhelming. Injuries have restricted him to an average of 29.5 games per season.

Now, Dembele is free to negotiate a contract with another club. If he does, he won’t join until the summer. Clubs will feel reluctant to pay Barcelona a transfer fee for a player they know is available for free in a few months.

Ousmane Dembele broke his silence on the matter in the hours after Barcelona’s public declaration. It is a silence that he says lasted for four years.

His complete statement is below.

‘It’s been four years that I haven’t stopped reading things about myself without ever trying to justify myself.

‘Four years where gossip about me has been piling up.

‘Four years that people have spoken about me, shamefully lied with one sole purpose, the intention of harming me. Four years I have following the same path of never answering, never justifying myself.

‘Has it been a mistake? Surely.

‘Starting today, I will answer honestly, without giving in to any kind of blackmail. I am 24 years old and like every man, I have flaws, imperfections. I have lived through difficult moments, injuries, and Covid has affected me.

‘Without the slightest training session, the mister has selected me and I have always complied… without question.

‘I’ve performed as well as I have always done because it is my PASSION.

‘I am fully aware of how lucky I am to dedicate myself to the most beautiful job in the world.

‘Also, my message is transparent.

‘Still under contract, I am fully involved and at the disposal of my club and my coach. I have always given everything for my colleagues and also for all the fans… that is not going to change now.

‘I am not a man who cheats and even less a man who has a habit of giving in to the blackmail.

‘Surely love is a variant of blackmail.

‘As you know, there are negotiations. I let my agent handle it, it’s his turf. My domain is the ball, simply playing football, sharing moments of joy with my colleagues and all members.

‘Above all, let’s focus on the essentials: WIN

When Dembele wrote ‘it’s over,’ he spoke about his silence. However, the same statement is undoubtedly applicable to his Barcelona career.

It would appear as though there is no way back.

Dembele appears destined to hang around Barcelona collecting the wage he’s due until the summer before departing on a free transfer.

Although Dembele played his part in the relationship becoming tense, the Barcelona board dropped the ball here by applying pressure to their player.