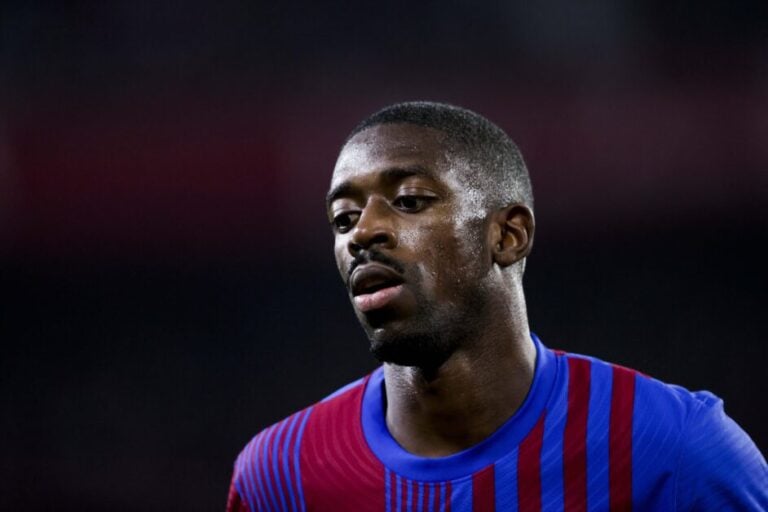 The future of Ousmane Dembele at Barcelona is still yet to be made clear, but with the January transfer window now edging ever closer, both club and player surely need to find a resolution quickly if he is to stay at the Nou Camp.

That is because, from January 1, the French winger can negotiate a pre-contract agreement with any club in Europe.

His current contract at Barca expires next summer. Much of 2021 has revolved around the club trying to convince Dembele to stay. However, they haven’t succeeded as of yet.

Spanish news outlet Sport have reported that the Frenchman has already agreed to renew his contract. But the 24-year-old’s situation has suffered a “setback” after a meeting between Barca chiefs and the player’s agent.

Journalist Santio Valle has been told that the club was asked why Dembele’s wage demands could not be met, even though they are trying to sign Erling Haaland from Borussia Dortmund.

Barcelona have just a matter of days to seal Dembele’s future one way or the other. Otherwise, the situation is technically out of their hands.

Undoubtedly, most of Europe’s top sides will be keeping a close eye on proceedings. Let’s take a look at the main clubs rumoured to be keen on signing the French international:

Bayern Munich have long been credited with an interest in completing a transfer for Ousmane Dembele.

They have contract issues of their own as well. French winger Kingsley Coman, whose deal expires in 2023, has been linked with a move away. The German giants failed to reach an agreement with their player over a new contract in the summer.

As per German outlet Bild, the club have responded by reopening talks in the past week.

But should Coman not extend, Bayern may have no other option but to sell. If that were to happen, the opportunity of signing Dembele as his replacement would perhaps be too big to turn down.

The Frenchman’s wages would likely be an issue for Bayern, but his rapid pace, silky skills and ability to drive at defenders would add a lot of value to the side – if he can stay fit.

Manchester United attempted to complete the loan transfer of Ousmane Dembele in the summer of 2020. However, Barca rejected the offer as, according to the Daily Mail, the Red Devils didn’t want an obligation to buy the player.

However, it was stated at the time that United were still keen on completing a deal. And that interest seemingly hasn’t gone away.

The makeup of United’s current squad almost dictates the need for a winger. Whilst Jadon Sancho has shown glimpses of form during his short spell at the club thus far, there isn’t a lot of cover on either flank. Mason Greenwood can play on the right but can also operate in a central role. Anthony Martial is expected to leave the club in January, while the future of Jesse Lingard is also unclear. The days of Cristiano Ronaldo playing on the wing appear to be over.

Read: Three clubs that could sign Anthony Martial in January

Fabrizio Romano has reported that two Premier League clubs have approached Dembele. A deal would certainly make sense for United, but they will have to fend off interest from other clubs.

Foot Mercato’s Santi Aouna has reported that Paris Saint-Germain are one of five clubs to have contacted the agent of Ousmane Dembele over a possible transfer.

If PSG were successful in bringing Dembele to the club, it would bring to an end a long-term transfer pursuit. The Frenchman revealed to Onze Mondial that he rejected a move to the French giants before completing his transfer to Barcelona.

The transfer would be an interesting one. If Dembele was to move this summer, he would have plenty of competition for places as it stands. Lionel Messi, Kylian Mbappe and Neymar occupy the three attacking positions at Parcs des Princes.

However, Mbappe’s current deal at PSG expires this summer, and he has been heavily linked with a move to Real Madrid. Throughout much of last season, Dembele played as a centre forward for Barcelona and on both flanks at times. The French international could be a perfect replacement as far as versatile players go.

Having been the subject of a Saudi-led takeover worth approximately £300 million in October, Newcastle United will no doubt be looking to make some statement signings.

Dembele became one of the club’s first big targets. In November, Spanish outlet Mundo Deportivo reported that the player had received an “astronomical” proposal from the Magpies. They are also one of five clubs to have reportedly contacted Dembele’s agent.

The issue as far as Newcastle are concerned is which division they will be playing in next season. Eddie Howe’s side are currently 19th in the Premier League. They are two points off safety, having played two games more than 17th-placed Watford.

Despite recent signs of improvement, including a 1-1 draw against Manchester United, there’s no guarantee the Magpies will stay up.

We can’t imagine a player as talented as Ousmane Dembele plying his trade in the Championship for at least a season, even on massive wages.