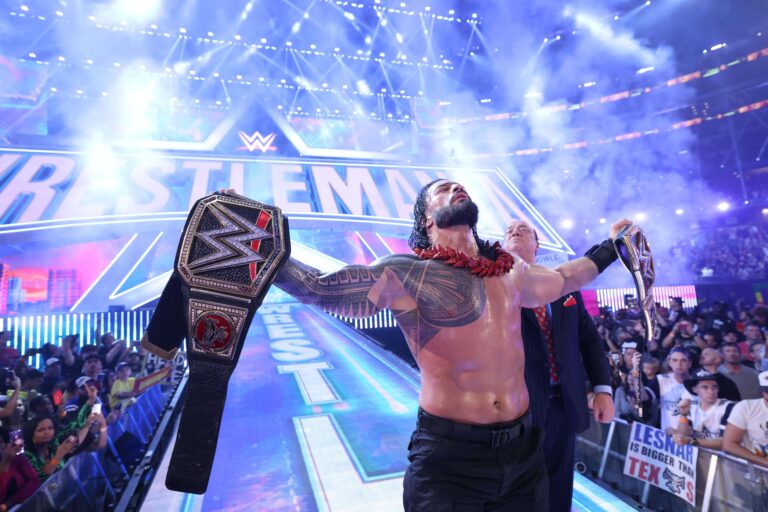 Roman Reigns is the current face of WWE in his position as Undisputed WWE Universal Champion, so it’s no surprise that he’s generated a massive net worth (Updated June 2022).

In 2020, ‘The Tribal Chief’ returned after a four-month hiatus due to the Covid-19 pandemic. And within two months of his resurgence, he was already back at the elite level. At Payback, he defeated Bray Wyatt and Braun Strowman in a Triple Threat Match to win the Universal Championship.

He now holds both men’s world titles in WWE after defeating Brock Lesnar at WrestleMania 38. It has been a meteoric rise for Reigns since his return to the company, and one that shows little sign of slowing down just yet.

What has Roman Reigns achieved in WWE?

Aside from winning numerous world title belts, he has also held the WWE Tag Team Championship and the United States Championship. Reigns also won the 2015 Royal Rumble after his cousin, The Rock, rushed to his aid to help him fend off Big Show and Kane.

In addition, he was named the Superstar of the Year in 2014, and has headlined WrestleMania on three separate occasions. At the 2017 event, he defeated all-time great, The Undertaker, in an incredible war of attrition.

However, since returning, Reigns has looked even better than ever before. He aligned with notorious manager Paul Heyman – his new special counsel. The American has turned heel, and in a shocking turn of events, soon began a feud with his own cousin, Jey Uso.

In a terrifying beatdown, he forced his opponent’s brother, Jimmy, to throw the towel in to save him from further punishment.

Following his victory, the 36-year-old has beaten every man put in front of him. Not only did he manage to defeat Kevin Owens in an iconic Last Man Standing match at the Royal Rumble, but he also emerged victorious in title matches against the likes of Edge, Rey Mysterio, John Cena and Finn Balor.

It seemed the partnership between Reigns and Heyman was working perfectly. But when his manager’s ex-client, Brock Lesnar, decided to return to the WWE, the relationship went sour.

Eventually, though, Heyman deceived Lesnar and returned to the side of ‘The Tribal Chief’. After Reigns’ victory at WrestleMania 38 in a title unification bout, and with The Usos holding the undisputed tag belts, the ‘Bloodline’ look more threatening than ever before – and they will take some stopping.

But after all his success, just how much money has Reigns made?

What is the net worth of Roman Reigns?

It’s no surprise that the American has managed to make a fortune throughout his remarkable life. Celebrity Net Worth estimates that he has created a whopping $12 million valuation of himself.

According to the Wrestling Observer Newsletter‘s Dave Meltzer, Reigns made more than $5 million annually as part of his previous WWE contract.

However, Reigns has since signed a new deal with the company, which limits the dates that he works. ‘The Tribal Chief’ will now work fewer live events, and will not appear at the upcoming Hell in a Cell premium live event.

Read: Brock Lesnar net worth: How much has he earned during his combat sports career?

Roman Reigns has become a massive global star throughout his time in the WWE and has established himself as perhaps the most impactful wrestler of his generation.