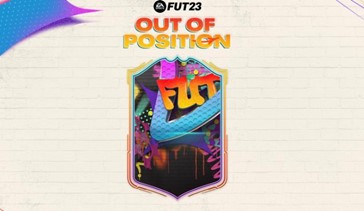 There is a new promo for FIFA 23 this week, with “Out of Position” coming to players of Ultimate Team. But what cards can gamers expect in this new promo?

EA confirmed the name of the new promo when they implemented a new loading screen into the FUT game mode. Featuring a funky, graffiti-style design, “Out of Position” is a brand-new name, never seen before on previous FIFAs.

However, it does bare similarities to other popular card releases that EA use during each FIFA cycle. On FIFA 23, “Out of Position” will feature cards for players in positions that they would not typically play in real life.

This is similar to the annual FUT Birthday promo, as well as the Shapeshifters event from FIFA 22 which used the same idea. Additionally, some long-term FIFA players may recall FUT Freeze – a promo which dropped at a near-identical time period to this new one, except on FIFA 21.

FUT Freeze featured some very popular and meta cards, which lasted for a lot of the game cycle. For instance, many FIFA 21 players will want to forget the LB Adama Traore card which tormented their attackers.

Meanwhile, other cool cards such as a ST Sadio Mane and CDM Marquinhos were also popular.

So, EA is trying to aim for a position-change promo for the first time in FIFA 23 with “Out of Position”. Unfortunately for them, though, leakers have already revealed the upcoming cards.

Reliable FIFA sources such as FUT Sheriff, Arcade FUT, and FUT Reveal have released a range of info about each Out of Position card on social media. And, by the looks of it, FUT players should be in for a treat.

Leading the promo is a 92-rated Mo Salah card. But instead of being his normal RW position, the “Egyptian King” is listed as a ST. In addition, Man City’s Joao Cancelo will reportedly have a 90-rated CM card, boasting a very impressive collection of stats.

Elsewhere, AC Milan LB Theo Hernandez has an Out of Position card that moves him up to LW. Finally, popular “meta” card Seko Fofana will get a CB card that should be an 86, per leaks. He typically dominates FUT midfields, so will surely be a bully in defence.

The whole team is in FUT Sheriff’s tweet below:

Another interesting element to this promo is the use of additional positions. Thanks to the new position modifier system, players can have other positions which they can be changed to in order to fit your squad.

As a result, these upcoming cards will also have differing places where you can put them in your Ultimate Team.

When does the new promo drop?

Out of Position will follow the typical FIFA schedule when it comes to new events. They will go into packs on Friday 28 October, as Friday is when EA unveil their new cards.

And, as ever, they will drop at 6pm UK time – with some promo packs released into the store at the same time.

Currently, rumours are quiet over whether this is a one-team or two-team promo. FIFA Ultimate Team (not officially affiliated with EA Sports) suggest that this could be the first of two squads. This would be similar to the earlier Rulebreakers promo, which had two squads drop one after the other.

But, as it stands, there is just one team for now.