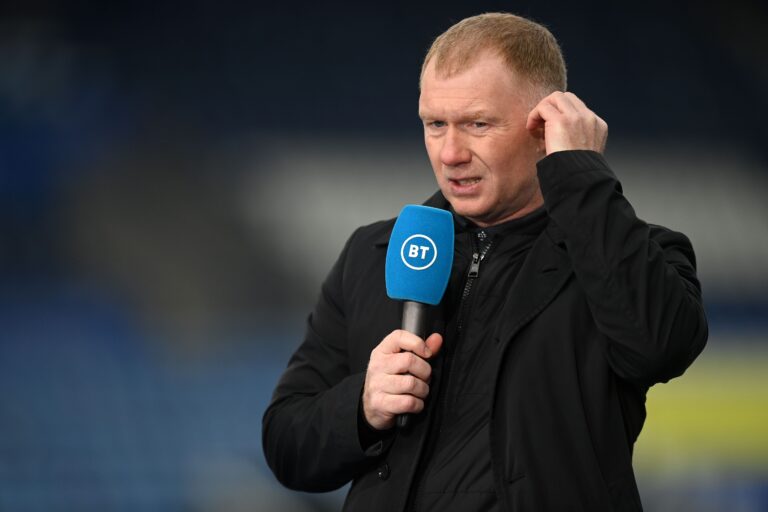 Paul Scholes has criticised Manchester United‘s first half display in their 3-2 comeback victory over Atalanta – although did credit their “great fighting spirit” in the second half.

Ole Gunnar Solskjaer‘s side were 2-0 down inside half an hour against the Italian outfit at Old Trafford, with goals from Mario Pasalic and Merih Demiral.

The Red Devils set up in a 4-2-4 formation in the first half. Fred and Scott McTominay were in the centre of midfield.

Speaking on BT Sport at half-time, Scholes took aim at the formation and claimed that United “will get destroyed”.

He said: “Ole said before the game it was 4-2-4. I don’t care who those two players in the midfield are, when you are playing against a good European team, you are going to get absolutely destroyed.”

“Neither wide player is running back, Bruno Fernandes is making the odd effort to get back in and help them, but they will get destroyed. If Manchester United were playing a really good team, we could be looking at four or five.”

United were much improved after the break, and secured a thrilling comeback victory via goals from Marcus Rashford, Harry Maguire and Cristiano Ronaldo.

Although Scholes pointed out the “great fighting spirit” that United showed, he expressed a tone of caution with their first half display – and clash against Liverpool on Sunday – in mind.

“The first half really worried me,” he said after the game.

“As I’ve said before – and people are going to say I’m miserable and I’ll probably get slagged off by United fans – but I looked at that game thinking about Liverpool on Sunday, thinking about Manchester City. Maybe it’s the wrong thing to do. Because I thought United were all over the place in that first half, they were disjointed. They had the two midfield players playing on their own.”

“If you do that against Manchester City or Liverpool, it would be 3-0 or 4-0 at half-time and you’d be out of the game, and you’re not coming back.”

“Yeah it’s great watching, seeing the excitement and seeing the United way, all the smiles on their faces, all the goals, all the attacking… it’s brilliant, I know that. But that first half just stuck with me.”

When are United next in European action?

United’s victory takes them top of Group F, with six points from three games. They are next in Champions League action on November 2 when they play the reverse fixture against Atalanta in Italy.

Solskjaer’s side take on Liverpool in the Premier League this Sunday at Old Trafford.