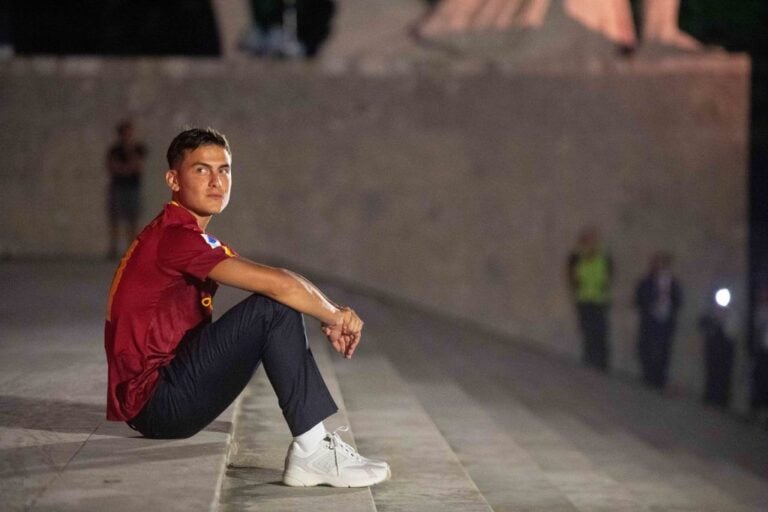 Fans in their thousands turned up in the Italian capital to witness the official unveiling of AS Roma star Paulo Dybala.

On July 20, the club announced they had agreed on a three-year deal with the Argentinian. Dybala became a fan favourite at the Allianz Stadium, renowned for his class on the ball, impressive agility and intelligent movement.

However, injuries and a contract dispute left the door open for Juve’s rivals to pounce. Knowing the class of the player, Jose Mourinho secured the deal and expects Dybala to make a huge impact in his squad.

As per Roma, the four-time Coppa Italia champion said: “The days that have led up to me signing this contract have been filled with so many emotions. The speed and determination with which Roma demonstrated just how much they wanted me made all the difference.”

He continued: “I am joining a team that is on the up, a club that continues to put in place strong foundations for the future, and a coach, Jose Mourinho, that it will be a privilege to work with. As an opponent I have always admired the atmosphere created by the Roma fans. I now cannot wait for the chance to salute them while wearing this shirt.”

The five-time Serie A champion was named the league’s MVP in 2020. In addition, he featured in their Team of the Season on four occasions. Therefore, it only makes sense that Roma supporters are so excited to see what he can do in the coming years.

On July 26, the world witnessed one of the greatest unveilings of all time. The epic Colosseo Quadrato played host to a remarkable celebration in which 100,000 fans descended on to the runway where the Fendi fashion house holds its prestigious events.

The remarkable building beamed bright with the club’s colours as the player walked out to greet his adoring fans. Dybala sat on the steps and looked out into the crowd, not quite believing his eyes.

The supporters sang their team’s anthem and waved flags in an incredible event, bringing the entire fanbase together. We don’t know what’s next for Roma’s new forward. But those who love the club are expecting very big things.