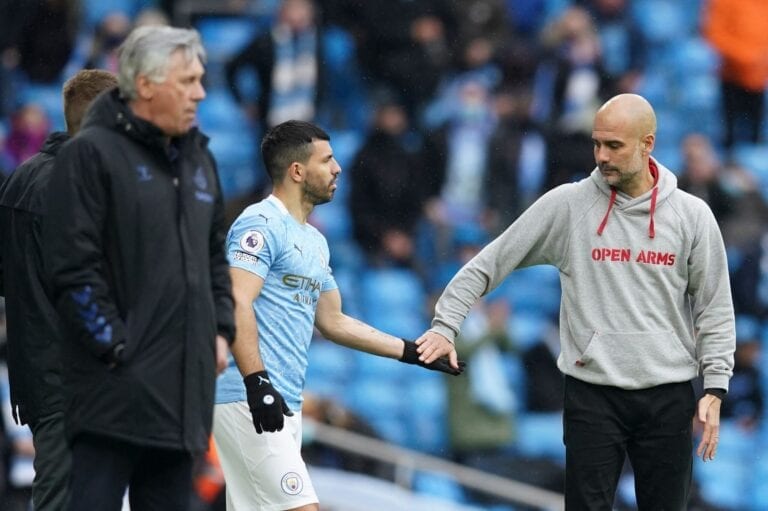 Pep Guardiola all but confirmed that Sergio Aguero is set to join Barcelona once his contract with Manchester City expires this summer.

Aguero’s future has been hotly debated since it was announced in March that he would be leaving City.

Barcelona have been amongst the favourites to secure the Argentinian’s signature and it looks as if they may be close to getting that deal over the line.

Speaking to Sky Sports after City lifted the Premier League title, City boss Guardiola said that Aguero could be close to signing for “the club of my heart”.

“Maybe [Aguero] is close to agreeing a deal for the club of my heart – for Barcelona.

“He’s going to play alongside the best player of all-time, Lionel Messi. I’m pretty sure he’s going to enjoy it and make my club Barcelona stronger and stronger with him on the pitch.”

Aguero bade an emotional farewell to City fans yesterday, with the 5-0 victory over Everton his last appearance at the Etihad Stadium.

He marked the occasion in typical Aguero fashion, scoring twice late on. In the process, he became the record goalscorer for one club in the Premier League era.

The 32-year-old will leave the Citizens after 10 seasons, having joined from Atletico Madrid in the summer of 2011.

At the end of his first season, he famously scored the goal that won City their first top division title in 44 years in a 3-2 victory over Queens Park Rangers.

The Argentinian netted a total of 260 goals for the club in all competitions, with 184 of those being scored in the Premier League.

That puts him fourth on the all-time Premier League list, and the highest amongst active players.

This season’s Premier League is the 15th trophy Aguero has won with City. He has an opportunity to win trophy number 16 when City take on Chelsea in the Champions League final on May 29.