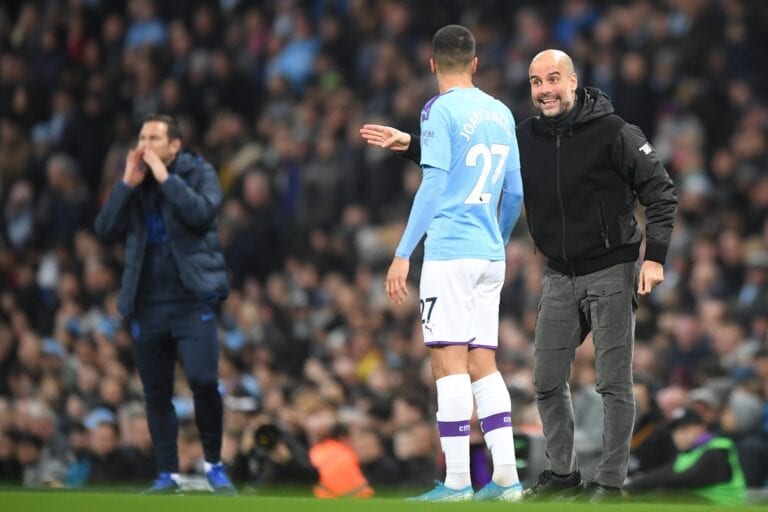 Manchester City manager Pep Guardiola gave a great insight into the reasons behind his use of full-backs in central areas.

The Spaniard was speaking to BT Sport’s Gary Lineker after his side’s 2-0 win over Borussia Monchengladbach in the Champions League on Tuesday evening.

The result – 4-0 on aggregate – sees them progress to the quarter-finals of the competition. The draw takes place on Friday, March 19.

Guardiola was asked about where the idea to use ‘central’ full-backs originated from, and went on to explain why the tactic is effective in his City side.

He explained: “It comes from Germany. When you lose the ball they kill you on the counter attack when our full-backs were wider.

“So this is one of the reasons why I learned this.

“The main reason is to have more players in the middle to pass the ball,” he continued.

“The main reason is to have more players – four, five, six players – to make short passes and [have] more control.

“We did it with Fabian Delph, through the year with 100 points, that was incredible.

“[Oleksandr] Zinchenko as well, and Joao [Cancelo] has this quality to do it.”

The Spaniard also provided detail on how important the tactic is in the process of creating chances.

“The big concept is we defend with the ball,” Guardiola said.

“We have to have the ball as much as possible and be aggressive when we don’t have it, be incredibly aggressive everyone, and with the ball a lot of passes, passes and passes.

“The situations come, the chances come after the process.

“When we are looking forward to creating chances immediately, that is not good, and that is why we have a lot of players in the middle – to create these kinds of situations.”

Guardiola’s side currently sit top of the Premier League, 14 points clear of second-placed Manchester United with eight games to play.

Their next fixture sees them travel to Everton for their FA Cup quarter-final tie on Saturday evening.