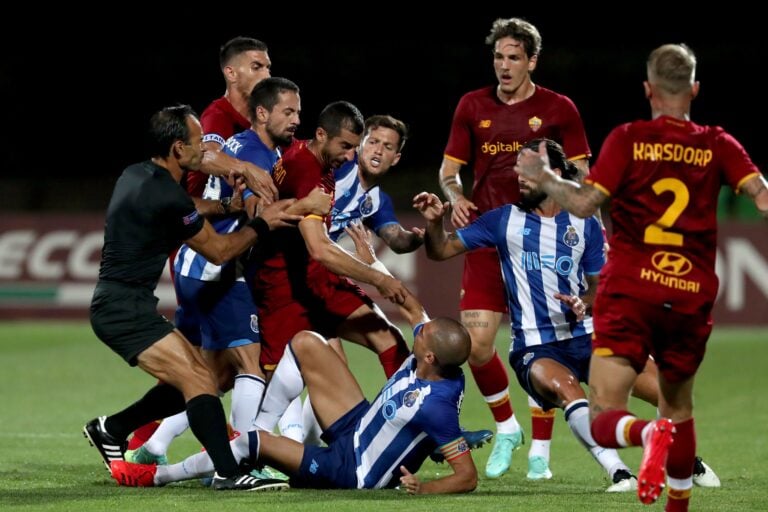 And the 38-year-old was at it again last night, in a friendly fixture between his side FC Porto and Roma.

The game was the fifth match in charge for new Roma boss Jose Mourinho, who had won all four of his previous games.

Mourinho, of course, managed Pepe when the pair were at Real Madrid between 2010 and 2013 – so he knows first-hand what the combative defender is capable of.

In the 64th minute, Roma’s Henrikh Mkhitaryan received a pass from team-mate Nicolo Zaniolo and looked for other options.

As he trapped the ball, however, Pepe came steaming in and caught him with an arm to the face.

What ensued was a mass brawl that involved almost every player on the pitch at the time, before substitutes and match officials charged in to try and defuse the situation…

Mkhitaryan himself was carried away from the brawl by one of the officials. He can be seen shouting in Pepe’s direction as he is led away, clearly raging with the challenge.

The Armenian winger tries to grab hold of Pepe whilst both men are on the ground, but was stopped when members of both teams surround him.

Astonishing, Pepe managed to avoid a yellow card, whilst Mkhitaryan was booked for his reaction. You get the impression that if this wasn’t a friendly match both men may have been looking at harsher punishments.

Mourinho’s side take on Real Betis in their final pre-season friendly before their Serie A season commences on August 22.

Porto, meanwhile, face Lyon on Saturday before kicking off Liga NOS on August 8.