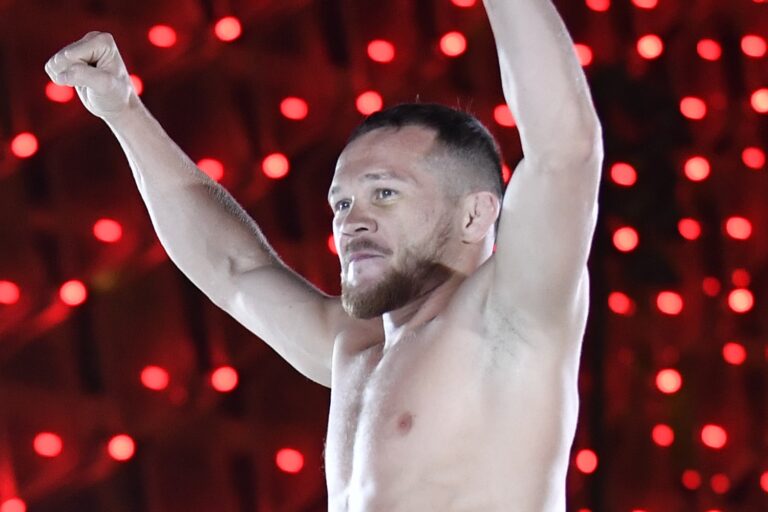 Petr Yan used his UFC 267 open workout this week to mock the illegal knee he landed on Aljamain Sterling earlier this year.

Back in March, Petr Yan defended his UFC bantamweight title against Aljamain Sterling in Las Vegas. It appeared as if “No Mercy” was en-route to retaining his belt but in the fourth round, he hit Sterling with a knee whilst he was deemed to be a downed opponent.

With Sterling being unable to continue, the contest was ruled a disqualification and the UFC’s 145-pound championship had a new holder in the form of Aljamain Sterling.

Now, as Yan gears up for a huge clash at UFC 267 on Saturday night, he’s decided to make light of the situation through his open workout.

The first step towards retribution

Petr Yan won’t be able to call himself the undisputed champion after this weekend no matter what happens as he’ll only be competing for the interim strap. The Russian is set to lock horns with Cory Sandhagen and while it’s bound to a fascinating style match-up, many fans were hoping to see the rematch between Yan and Sterling.

That was supposed to be the co-main event for UFC 267 but ultimately didn’t come to fruition as “Funk Master” had to pull out due to lingering neck problems following surgery.

Alas, while Yan is hungry to get back to the summit and get revenge on Sterling, he can’t afford to look past the always-dangerous Cory Sandhagen on Fight Island.

You can catch that fight and many more this Saturday when UFC 267 gets underway with the prelims at 5pm on BT Sport.