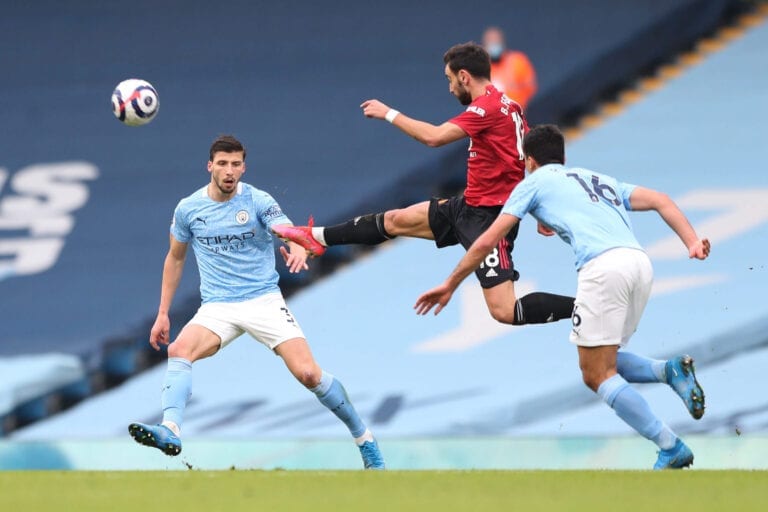 With the current Premier League campaign entering its closing stages, the PFA Player of the Year is set to be awarded.

The award announcement will be made on June 4, exactly a week before Euro 2020 kicks off.

Last year’s winner was Manchester City‘s Kevin De Bruyne. The Belgian is amongst the leading candidates to lift the award again this time around – but he has some strong competition.

Let’s take a look at the favourites to become this season’s PFA Player of the Year (all odds courtesy of oddschecker & correct at the time of writing):

Ruben Dias is currently odds-on to win the PFA Player of the Year award after an outstanding first season at Manchester City.

The Portuguese centre back signed from Benfica for a fee of £65 million, and slotted seamlessly into the Citizens’ backline.

His partnership with John Stones was an important factor in their fine form during the winter months, when they won 21 consecutive games in all competitions.

He has also helped City to win the League Cup and the Premier League title, and reach the Champions League final.

The 24-year-old has been widely acclaimed by fans and pundits, with Jamie Carragher comparing Dias to Barcelona legend Carles Puyol last week.

Bruno Fernandes has backed up a superb start to his Manchester United career last campaign with an impressive first full season at Old Trafford.

The Portuguese midfielder has scored 18 goals and provided a further 11 assists in the Premier League, and has helped United to second place in the table.

He has also scored five times in the Europa League, with the Red Devils contesting the final of that competition on May 26.

Fernandes has picked up two Player of the Month accolades – in November and December – this season.

Spurs’ form may have been inconsistent this season, but Harry Kane certainly hasn’t.

The 27-year-old is enjoying arguably the finest individual season of his Tottenham career, scoring 22 goals and providing 13 assists.

That means he has been involved in more than every one in two Spurs goals in the Premier League this campaign.

He is also currently joint-leader in the race for the Golden Boot, alongside Liverpool‘s Mohamed Salah.

The winner of last year’s award, Kevin De Bruyne has had another excellent season for Manchester City.

Despite missing nine Premier League games through injury, he has still contributed five goals and 11 assists.

Only two players in the history of the award (Thierry Henry and Cristiano Ronaldo) have won it in two consecutive years since it was first presented in 1974 – can De Bruyne become the third?