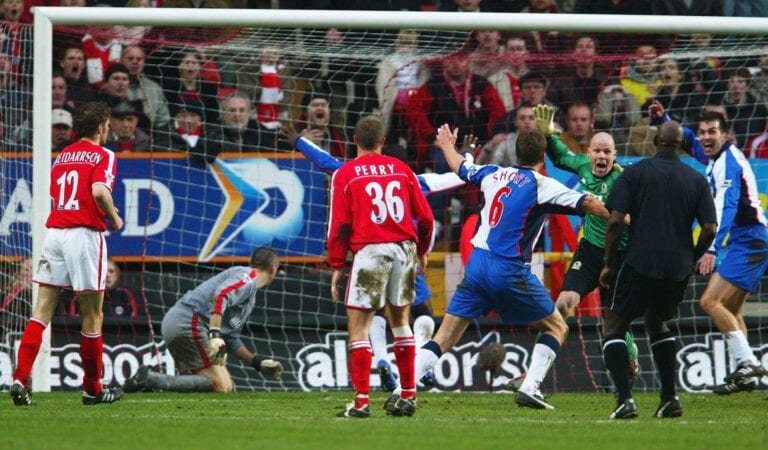 Alisson’s 95th minute winner for Liverpool in their 2-1 victory over West Bromwich Albion was the first time a Reds goalkeeper has scored in the club’s history.

The Brazilian leaped to meet a Trent Alexander-Arnold corner, planting his header into the top corner.

That sparked scenes of jubilation amongst the Liverpool players, whose Champions League qualification hopes remain in their own hands as a result.

It is the first time a goalkeeper has scored in the top flight since 2013, and only the sixth time it has happened in Premier League history.

Let’s take a look at the other five:

With Villa losing 3-1 against Everton in 2001, Peter Schmeichel went up for a late corner.

There’s never been many better goalkeepers for that particular job. Schmeichel scored eight goals in his native Denmark, before adding another for Manchester United in a UEFA Cup tie in 1995. He also scored once for the Danish national team in 2000, giving them a 2-1 lead in an eventual 2-2 draw against Belgium in Copenhagen.

This time, he waited at the back post for the ball to drop down, before volleying it into the back of the net for his 11th and final career goal.

This one rivals Alisson’s header in the drama stakes.

With Blackburn losing 2-1, Paul Gallagher crossed the ball in, and it was deflected into Friedel’s path.

The American international, who had come up for the original corner, showed some lightning fast reactions to divert the ball in with his left foot.

He looked to have rescued a point for Rovers, but more was to come.

In the 92nd minute, Charlton’s Claus Jensen produced a half-volley that Friedel could only help on its way into the top corner.

The first of three goalkeepers on this list to score from within their own half, Paul Robinson’s piece of goalscoring history came from a free kick.

His kick went over the head of everyone, before bouncing over Watford ‘keeper Ben Foster.

It wasn’t the first time Robinson had scored in his career. He headed in from a corner to give Leeds victory over Swindon in the League Cup second round in 2003.

In inclement weather conditions during Everton’s game against Bolton in 2012, Tim Howard scored from inside his own area as the ball bounced over Trotters ‘keeper Adam Bogdan.

The American called his goal “cruel” on his opposite number.

He explained: “It was cruel. You saw the back fours and the keepers not being able to believe balls all night, and at the back one wrong step and it can be a nightmare.

“For our goal I was disappointed from a goalkeepers’ union standpoint. You never want to see that happen.”

Asmir Begovic made history when he scored just 13 seconds into Stoke City’s game against Southampton in November 2013.

The Bosnian ‘keeper was recognised by Guinness World Records as scoring the longest ever goal in professional football.

His kick went between the two central defenders before bouncing over Saints stopper Artur Boruc, who scrambled towards his goal line but to no avail.