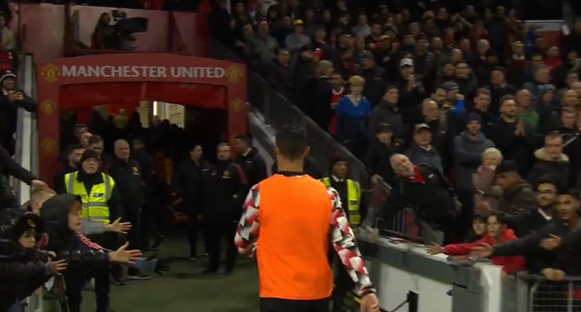 Cristiano Ronaldo came under fire from former pros turned pundits after the Portugal star went down the tunnel before the end of Man United’s 2-0 win over Spurs last night.

After starting on the bench, Ronaldo went out along the touchline in the second half to warm up. However, manager Erik ten Hag elected to not use the forward. So, in a frustrated response, Cristiano Ronaldo exited the Old Trafford pitch via the tunnel.

Additionally, per The Athletic, the Red Devils No.7 not only left the pitch early, but also the stadium early. Ronaldo reportedly did not stick around for post-match celebrations, electing to leave Old Trafford entirely.

He has left games before the final whistle on more than one occasion this season. As a result, numerous pundits voiced their criticism of the five-time Ballon d’Or winner.

“It’s deliberate, the fact that he has done that,” said Mills, via Sky Sports Premier League on Twitter. “And it’s a bit of a selfish act. You know ‘actually, I’m not involved’. He knows full well that everybody is going to see him walk down [the tunnel].

“Because you know what it’s like at Old Trafford, you’ve got to walk all the way down the touchline. He knows that everyone is going to watch him.

“And you know, I feel sorry for United now, and Ten Hag. That [2-0 win] is an outstanding result against a top side. But all it’s going to be about is Ronaldo.”

“It’s just so frustrating,” began Richards, via BBC on Twitter. “Because Ronaldo made it about him. The team got a great win against Spurs. Ten Hag had problems with him in pre-season, and the team has been doing really well without him. So, to do that was just unprofessional.”

CR7’s manager at United, Erik ten Hag, refused to be drawn too much on his player’s mid-game antics during his post-match presser.

In a press conference held after the game, the Man United boss tried to keep focus on the players who had put in such a good performance.

“I didn’t pay attention to it [Ronaldo leaving] today,” said Ten Hag, via Sporting News. “We will deal with that tomorrow.

“I want to get the focus on the team. It was a magnificent performance from all 11 players. I have to correct myself – it was the subs who came on as well. It was a squad performance.

“We deal with Ronaldo tomorrow. What we’ve seen today are 11 players who defend, who attack, and a lot of dynamic. I’m pleased with that. I will not say I’m totally satisfied – that has to be the standard here.”

Ten Hag had every right to praise his team as they produced their best performance under his management so far.

The Red Devils claimed a comfortable victory in front of their home fans over Tottenham last night. In a showing where United had a whopping 28 shots, they dominated the visitors and arguably could have scored more.

Following a goalless first half, Fred broke the deadlock just after half-time with a deflected strike from the edge of the box.

Bruno Fernandes then doubled United’s advantage at the 70-minute mark. His lovely, curling effort flew past Lloris, who had a tremendous game to keep Spurs within touching distance.

However, Antono Conte’s side could not get back in the match and fell to their second defeat of the season.