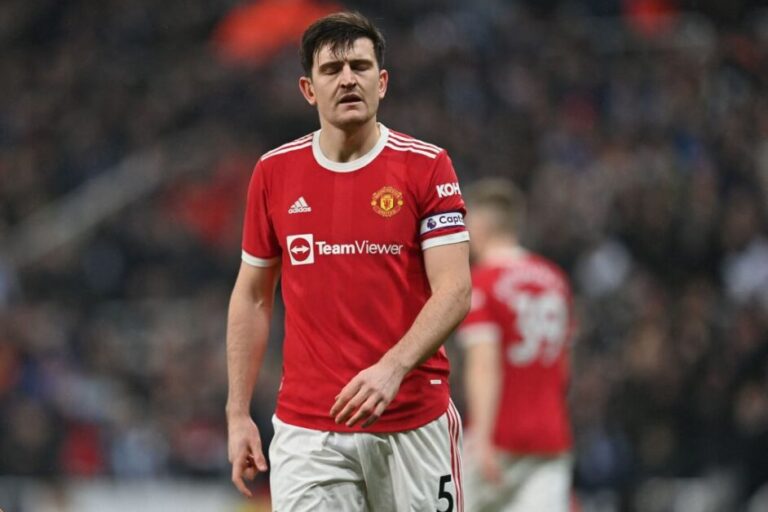 Two years into the job, Harry Maguire has failed to convince as Manchester United captain.

Maguire is an easy target for fans and pundits due to his lacklustre performance on the pitch. When the Red Devils fall apart defensively, all fingers point at the England international, who hasn’t lived up to his hefty £80m price tag.

United have conceded 27 goals this season, tied with West Ham for second-worst in the Premier League top ten. Only Leicester have conceded more goals, with 33.

Obviously, Maguire is not the only man to blame for United’s defensive catastrophe. Rangnick’s side has been weak all around in the back, with his full-backs coming in for their fair share of criticism, particularly Aaron Wan-Bissaka.

However, the difference resides in their status inside the locker room. Maguire, who became United captain in January 2020, has been singled out for his glaring lack of leadership ability.

Jittery and anxious, Maguire struggles to instill confidence in his teammates.

Now, the whispers have grown so loud that Ralf Rangnick has had to publicly address them.

During a press conference ahead of the Red Devils’ next match against Aston Villa, the United manager answered a question about the possibility of Ronaldo becoming captain.

The German manager gave a characteristically sober reply: “I see no reason to do that because Harry has been captain so far. As long as Harry is playing he will be captain.

“If he’s not playing someone else will have to be captain. This can change from game to game depending on who’s playing.”

Based on the press conference, there’s little to indicate that Rangnick will strip Harry Maguire of the captain armband. However, sometimes silence is more powerful than words.

Rangnick didn’t bother to spend a single second praising the United captain. His response was perhaps too sober, passing on an opportunity to give Maguire some much-needed reassurance.

If Maguire is to go on wearing the armband, he needs his manager and teammates to express unequivocal support in public. The centre-back is looking shaky enough as it is, with his nervous errors costing United plenty of points.

Demoting him as captain could be the coup de grace for a player already low in confidence.