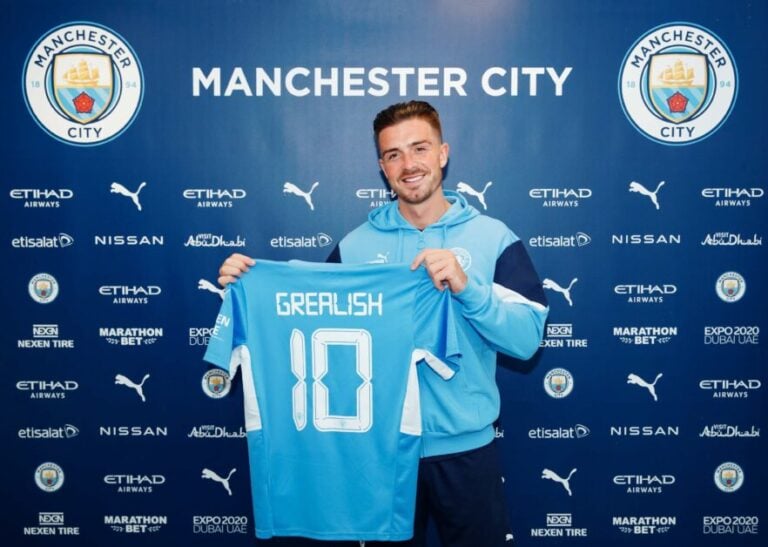 Transfer fees for Premier League players have continuously risen ever since the new top division of England was officially formed in 1992, with record deals broken almost yearly.

Whereas in the first decade of the Premier League, it would be more commonplace for top stars to move on for anything from between £5 million and £30 million, some clubs are now splashing out close to nine-figure fees for players.

Jack Grealish currently holds the Premier League’s transfer record. Manchester City spent £100 million to bring the winger to the club from Aston Villa in the summer of 2020.

At 25 years of age when he signed, the England international is heading into the prime of his footballing career. Clubs will naturally pay the big bucks for any young player who is quickly establishing themselves, or players hitting the peak of their careers with plenty left to offer.

According to an infographic published by journalist Omar Chaudhuri, there are seven expensive Premier League players who have been transferred for £60 million or more and sit top of their respective age groups.

Let’s take a look at some of the highlights of the list:

Theo Walcott became the most expensive 16-year-old in English football when he joined Arsenal in January 2006.

Within six months, he had made his England debut and was set to travel with the squad to the 2006 World Cup. Many pundits questioned Walcott’s inclusion at such a young age. He didn’t even make his Premier League debut until the following season.

But Walcott showed promise – and lots of it. He never truly reached his potential because of injuries, but 104 goals in 397 games was still an excellent return for a player who could have had the world at his feet. At £5 million, it was still a wise investment.

Like many teenagers who go for big-money fees, plenty of eyebrows were raised when Manchester United splashed out £36 million on Anthony Martial in the summer of 2015.

United boss Louis van Gaal himself called the size of the fee “ridiculous” but that the club were regularly quoted more considerable fees for players given their stature.

Has it been money well spent? There have certainly been huge highlights. We all remember his debut goal against Liverpool at Old Trafford, and the Frenchman struck 17 goals in the 2019/20 season.

However, there have also been some significant lows. Martial has scored just five goals in the last 18 months and looks to be on his way out of the club.

Read: Three clubs that could sign Anthony Martial in January

Alongside Zlatan Ibrahimovic, the £89 million deal to bring Paul Pogba back to Manchester United was one of two statement signings in the first summer in charge of new boss Jose Mourinho.

Heralded as the return of one of the best midfielders in football, Pogba has shown his world-class talent on numerous occasions. He was directly involved in 47 United goals in his first three Premier League seasons.

But injuries have hit him hard, and he has struggled to find his best form consistently in recent seasons. Like Martial, Pogba looks to be heading towards the exit door this summer.

Even now, it is hard to think of a transfer that went on to cause quite so much drama in the Premier League.

Andriy Shevchenko arrived at Chelsea in the summer of 2006 to much fanfare. The Ukrainian had bagged 28 goals in 40 appearances for AC Milan in all competitions in the previous season. At 29 years of age, this was a striker at the top of his game.

However, it didn’t work out that way. Shevchenko struggled at the Blues, scoring just nine times in two seasons. As reported by The Athletic, he wasn’t Mourinho’s first-choice transfer. But Roman Abramovich wanted to bring the striker in.

Didier Drogba revealed (quotes via Daily Star) that he “didn’t see any desire to collaborate” from Shevchenko. The former AC Milan star moved on in 2008, first back to his former club before signing for Dynamo Kiev.

The other notable expensive Premier League players by age

After Grealish, Romelu Lukaku, 28, is the second-most expensive player in the division. Chelsea paid a reported £98 million to bring the Belgian to the club from Inter Milan this season.

Jadon Sancho, meanwhile, cost United £73 million from Dortmund last summer at the age of 21. That is £7 million less than the club paid to bring in Harry Maguire in £80 million, making Sancho the fourth-most expensive Premier League. In fifth, Riyad Mahrez was 27 when joined Manchester City for £60 million back in 2017.

Further down the list, Chris Wood’s January move to Newcastle sees him as the most expensive 30-year-old in Premier League history.

At 34, the £2 million that Manchester United spent on Edwin van der Sar has to be one of the best value-for-money deals in Premier League history. The Dutch goalkeeper spent six seasons as United’s undisputed number one under Sir Alex Ferguson before retiring in 2011.