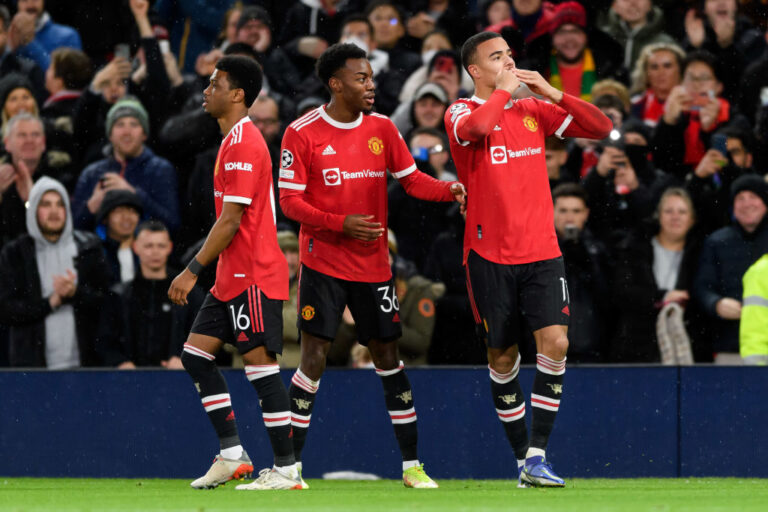 Manchester United fielded a young side in their 1-1 home draw against Young Boys in the Champions League last night. Mason Greenwood scored the home side.

It was a dead rubber tie, with United already securing the top spot. This security allowed Ralf Rangnick to give a few match-starved veterans minutes and test his brightest prospects’ abilities on a relatively grand stage.

Although the second-half display was drab, there were positives for Rangnick to take away. One of the biggest was Greenwood.

The forward scored United’s only goal with an acrobatic finish in the opening ten minutes. His display made it easy to forget that he was essentially in the same age group as many of United’s young debutants.

At 20, the sky is the limit for the English striker.

In the post-match press conference, a reporter asked Rangnick how Greenwood compares to Erling Haaland, given that they’re similar ages.

It seemed like a fair question to ask, given that Rangnick has worked with Haaland before. However, Rangnick didn’t particularly approve of it.

He said: “I don’t think that we should compare those two players. They are different kinds of strikers and players. Erling Haaland is extremely physical.

It was a typically thorough and specific Rangnick answer. With his Haaland scouting report out of the way, the coach moved on to Greenwood.

How Mason Greenwood can improve

Greenwood has accomplished a lot in his short career, finding the back of the net 34 times in 121 United appearances. His talent is evident for all to see.

But for those who can’t see it or don’t know what they’re looking at, Rangnick was on hand to explain Greenwood’s most outstanding qualities. He also pointed out where Greenwood can up his game.

Rangnick continued: “Mason is more of a nine and a half. He can play him as a striker. He can also come from the wing or together with another striker. And he’s very technical – left foot, right foot.

“And, as I said, sometimes he looks a little bit [like he’s] not on an athletic level, and I think we have to develop him there physically. But technically, all the things that he can do with the ball are outstanding.

“So I’m not so much worried about his technical level. We need to develop him physically and mentally to become the strongest version of himself.

“And if we manage to do that, he will- he can become a regular player and a very valuable player for our club for the future.”