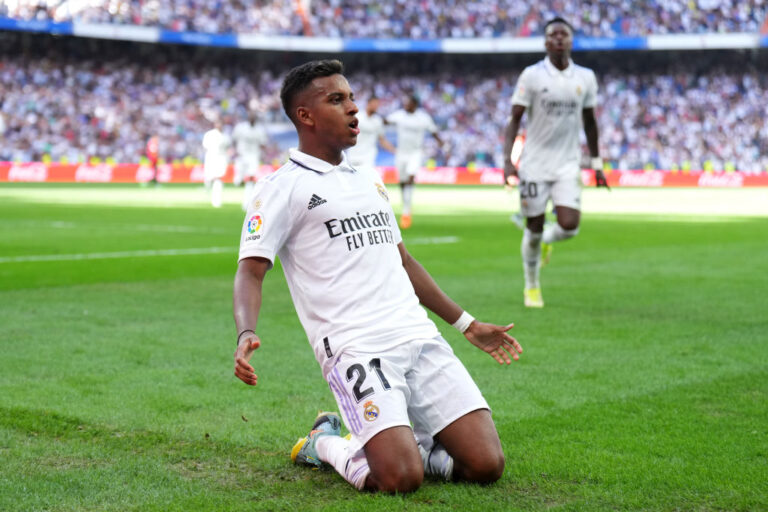 Real Madrid have reportedly expressed their concern over the state of the pitch at their stadium, the Santiago Bernabeu.

Spain has suffered from incredibly hot weather this summer, with the unrelenting heat continuing this weekend. During Real’s game at home to Mallorca, temperatures reached a toasty 33 degrees Celsius.

The country’s hot temperatures, therefore, create pitch condition issues for a number of La Liga sides, including Los Blancos. For a lot of teams, restrictions on the amount of water have also made grass maintenance tricky. Officials brought in these usage limitations in light of the drought that the Iberian Peninsula has suffered.

Per France 24, some regions of Spain are at their driest point in a thousand years, with most reservoirs beneath 40% capacity. Because of this, restrictions are in place. For instance, in the Catalonia region, water is limited to 200 litres per person, per day.

The dry weather has had an impact on Real’s pitch at their Bernabeu home, too. Despite only being replaced in 2021, the turf looked patchy and arid during their 4-1 win on Sunday. As a result, club officials are worried about the damage that may occur before their next La Liga game.

This is an uncommon issue for Madrid to suffer. Typically, the pitch at their beloved stadium is a pristine carpet, fitting of their elite status. However, the heat has torched the turf, altering the surface quality.

The Real Madrid hierarchy are concerned, as they have no time to fix the pitch before the next match at the Bernabeu. Los Blancos host RB Leipzig in the Champions League tonight (September 14). Therefore, their pitch gets minimal recovery time following the Mallorca game last Sunday.

In addition, with another 90 minutes of action trodden in, further field damage could occur.

Mercifully, an international break provides both the Bernabeu turf and Real Madrid some respite from the packed schedule. After Wednesday’s UCL game, their next home match is Osasuna on October 2.

According to AS, Los Blancos believe that they can rectify the poor pitch condition during this two-week break.

However, the club has not specified the manner in which they will fix the surface. Will it be with some tender loving care? Or will they replace their pitch for the second consecutive year?

Their ground issues come at a time when Real Madrid are still doing renovations to the Santiago Bernabeu stadium. But these changes could spell an end to any pitch worries.

As part of the new stadium, Real are planning on having a removable pitch, per Footy Headlines. This rolls the field in and out of the ground, meaning they can protect the grass from the elements and maintain it fully.

An added bonus of the roll-out pitch is that the stadium can host a number of different events without damaging the turf. Madrid can make plans to hold concerts, basketball games, American football, and tennis matches at the Bernabeu in the future.

Despite the exciting upgrades, the stadium developments have suffered a setback. Football Espana report that Real expect to start the 2023/24 season in their upgraded digs. This is a significant delay from the previously desired deadline.

When Los Blancos began work on the Bernabeu in 2019, they set December 2022 as their completion date. Unfortunately, supply issues as a result of the conflict in Ukraine and the COVID-19 pandemic have slowed progress.

With turf quality issues showing no signs of letting up, though, the removable pitch cannot come quickly enough.