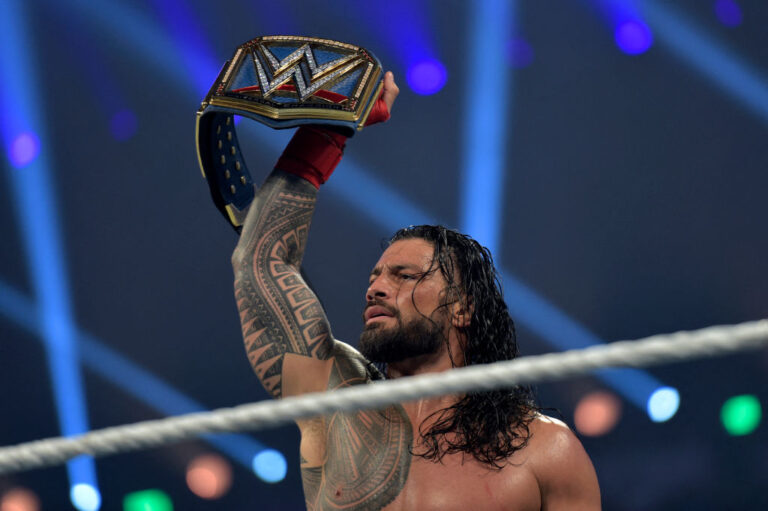 Roman Reigns currently stands alone as the biggest name in WWE. But having two belts around his waist is proving problematic to the company.

After a turbulent start to his time at the company, ‘The Tribal Chief’ has become one of the greatest superstars in the history of the business. The 37-year-old has utilised his sublime athletic talent, and fearsome presence on the mic, to captivate viewers from all over the world.

On August 30, the WWE poster boy celebrated the two-year anniversary of his crowning moment. Reigns defeated Bray Wyatt, and Braun Strowman in a No Holds Barred Triple Threat match at Payback.

He has since beaten Drew McIntyre in front of 62,000 fans at WWE Clash at the Castle, Brock Lesnar at WrestleMania and even John Cena at SummerSlam.

However, there are still plenty more match-ups that the fans want to see. The likes of Seth Rollins and Kevin Owens currently hope to reignite their feuds with the champion, and Karrion Kross is also seemingly gearing up for a shot at the titles.

But due to the nature of their biggest star’s contract, the company are in a bit of a predicament.

WWE undecided about what to do with Roman Reigns

The powerhouse currently holds both world championships, while only working on a reduced schedule.

WrestleVotes reported today that the situation involving Reigns being the only title holder is very complex.

A source claims that: “They [WWE] would like to go into “Mania season” & WrestleMania itself with 2 champions, but they also don’t want Reigns losing AT ALL prior. I’m told HHH & co are open to all things creatively here.”

Ideally, WWE would like their biggest name to square off with his cousin, The Rock.

However, that would depend on the actor’s busy schedule. Fitting the match in between his Hollywood commitments and the relaunch of the XFL, certainly wouldn’t be easy. Neither would taking a belt off Reigns without him actually being defeated. It will be interesting to see how Triple H deals with this major dilemma.