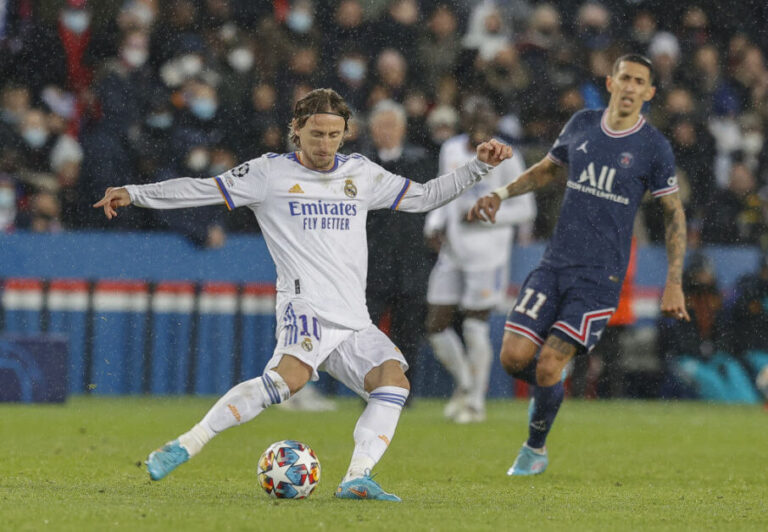 This Real Madrid statistic highlights why UEFA might have made a mistake with their Champions League rule change.

On February 15, the Spanish side collided with PSG in a crunch last 16 fixture. The important fixture had a little extra spice added to the mix, with Kylian Mbappe considering a move to the Bernabeu in the summer.

However, he might reconsider his dream transfer as his current team absolutely dominated the game. PSG firmly put Madrid in their place. They bossed possession and produced 21 shots at goal, eight of which were on target. The La Liga side wasn’t able to test Gianluigi Donnarumma even once.

But regardless of their impressive display, ‘Les Parisiens’ couldn’t find the all-important goal they needed to clinch the victory—until Mbappe produced a moment of magic. With stoppage time nearing completion, the Frenchman bamboozled two defenders to cut in from the left wing and slot the ball home in one of the most mesmerising displays of skill this season.

However, although his goal has captured the headlines, another aspect of the fixture has created an interesting talking point.

Read: How UEFA could finally put an end to the Super League

Madrid’s pitiful performance featured a mere three shots throughout the game and a disappointing possession rate of just 42%. They seemed content in playing for the draw. Their defensive play frustrated fans who wanted to see their side go for the victory. The BT Sports highlight package summarised how little effort they put into attacking as the clip didn’t feature a single one of their chances.

However, some experts, such as Michael Cox, believe that UEFA’s decision to scrap the away goal caused their disappointing showing.

He wrote on Twitter: “Real Madrid playing for a 0-0 here. I’ve never seen them play so defensively. UEFA need to come up with some way to incentivise attacking play from the away side in knockout games.”

Why did UEFA change the away goals rule?

Before this season began, UEFA made the decision to scrap the away goal rule from all its competitions. The practice helped to decide the victor of two-legged knockout ties. When both teams were tied on aggregate over both games, the club that had scored more away goals advanced to the next round of the competition.

But UEFA president Aleksander Ceferin revealed that the governing body decided to change the rule after its ‘fairness’ was questioned.

He explained: “However, the question of its abolition has been debated at various UEFA meetings over the last few years. Although there was no unanimity of views, many coaches, fans and other football stakeholders have questioned its fairness. They have expressed a preference for the rule to be abolished.

“It is fair to say that home advantage is nowadays no longer as significant as it once was. Taking into consideration the consistency across Europe in terms of styles of play and many different factors which have led to a decline in home advantage, the UEFA Executive Committee has taken the correct decision in adopting the view that it is no longer appropriate for an away goal to carry more weight than one scored at home.”

The decision to change the longstanding rule is undoubtedly controversial. On the one hand, the argument that all goals should carry the same weight stands. But looking at the other side of the coin, the away goals rule always added a little extra bit of excitement to Champions League football.