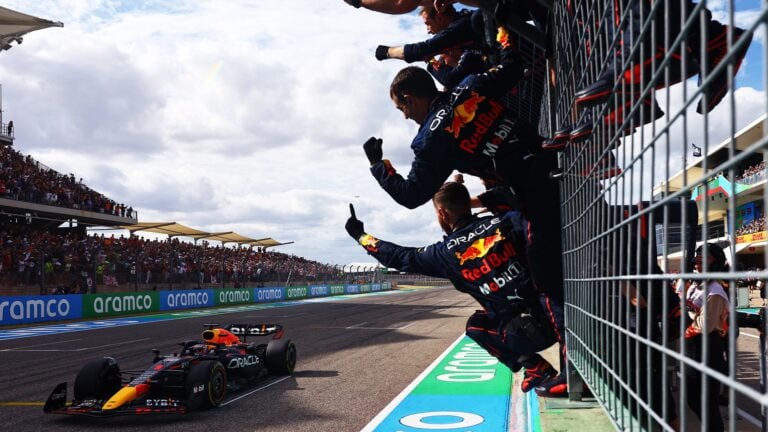 Red Bull Racing finally received their flowers for the team’s dominance of the 2022 F1 season as they became the constructors’ champions at the US Grand Prix.

Heading into round 19 in Austin, Ferrari needed to outscore their rivals by 19 points in order to keep their slim hopes of the team title alive. However, George Russell scuppered the Scuderia’s chances as the Mercedes driver spun out Carlos Sainz on lap one.

This gifted new World champ Max Verstappen the lead. He looked comfortable for most of the race – despite two safety cars throwing a spanner in the works.

A slow pit stop then saw Lewis Hamilton take the lead, but Verstappen passed his long-time rival to take the chequered flag and kick-start celebrations in the Red Bull garage.

With Ferrari’s Charles Leclerc only able to finish third, Red Bull became constructors’ champions with three rounds to spare. An emotional Christian Horner dedicated the title to Red Bull founder Dietrich Mateschitz, who passed away on the weekend.

“He had a dream which was to have a Formula 1 team and he did that, and, in the end, he had two. He gave us all an opportunity, believed in us, and backed us and this is for him.

“We are just tremendously grateful for everything he has done for us, as individuals and as a team” continued Horner. “We are going to celebrate in his honour tonight.”

With their crown, the Milton Keynes-based outfit add to their triumphs at the start of the 2010s. But how do Red Bull compare to other teams in F1 history?

Red Bull are constructors’ champions: where are they on the all-time list?

Red Bull now have five constructors’ championships to their name. This 2022 title adds to their quartet which they achieved from 2010-2013. During this period Sebastian Vettel also won the team their first-ever driver’s championship, winning four in a row himself.

With five titles, Red Bull consolidate sixth place in the all-time team championship rankings. They extend their lead over Renault (now Alpine), who have two titles, as do the historic Cooper and Brabham teams.

However, Christian Horner and co are still three behind McLaren and Mercedes, who are joint-third all-time. They both have both claimed the constructors’ championship on eight occasions. Interestingly, despite racing in F1’s early years, all of Mercedes’ titles have come in the turbo-hybrid era.

Williams then hold second place on this list, with nine team titles in their history. This may be surprising to some, given the team’s status as a backmarker in recent years. Their last title came in 1997 when Jacques Villeneuve also took the driver’s championship for Williams.

If Red Bull can maintain their dominance up to the rule changes in 2026, all these teams are within touching distance. The leading squad in F1 history, though, are head and shoulders above the rest.

Ferrari in a class of their own

As the only team to compete in every World championship season, it is unsurprising that the prancing horse has also experienced the most success. Ferrari have a staggering 16 constructors’ crowns, putting them seven ahead of the next-best crew.

Their most recent triumph came in the 2008 season. Unfortunately, Felipe Massa missed out on the driver’s title by a single point that year. As a result, Kimi Raikkonen (2007) remains Ferrari’s most recent World champ.