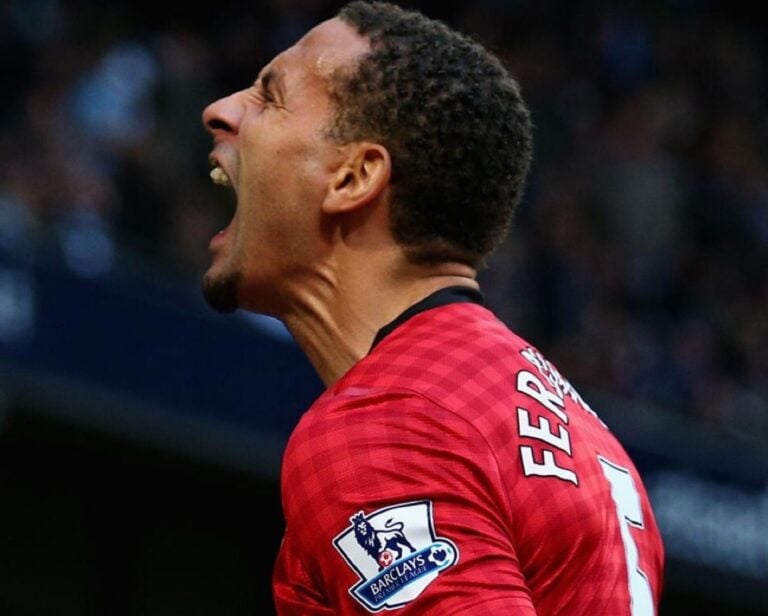 Although Rio Ferdinand exuded confidence throughout his career, during his academy days, he worried whether he had the minerals to make it to the pinnacle of the sport.

The ex-defender is viewed as one of the greatest male centre-backs in English history. The towering powerhouse left strikers quaking in their boots with his formidable aura and tackling ability.

After impressing at West Ham, he joined Leeds for £18 million and then Manchester United for a record-breaking £30 million.

During his spell at Old Trafford, the legend picked up a Champions League title and won six Premier Leagues. But despite his rapid ascent up the footballing ladder, the Londoner apparently had a lot to deal with behind the scenes.

Read: Do these statistics indicate Cristiano Ronaldo is past his prime? (sporf.com)

The 44-year-old recently teamed up with Amazon Prime to record a docuseries entitled ‘Tipping Point’. The show takes a look at the issues players suffer with surrounding race and mental health.

Ahead of the release, he told SPORTbible: “One of the lads we met in the episode was Lee Goodwin. He was a midfielder and played in my position at the time. He came in and took my place. I was on the bench for about eight months.

“I was seriously sitting there saying, ‘I don’t know what’s happened here, I’m gone.’ I had a bit of a growth spurt and lost my coordination. So I just wasn’t the same player for a couple of months,” Ferdinand says.

“I genuinely started to think that I might have to leave West Ham, that I might not make it,” he continued. “I was lucky that I had some good people around me that reassured me, telling me, ‘keep working hard, and you’ll get to where you need to get to’. So I stuck at it.

However, Ferdinand counts himself as very lucky for having supportive people surrounding him, “Not everyone is afforded those good people around them, those experienced people around them. I had those people at a vital point in my career. Without them, who knows what would have happened to me?”

While Ferdinand made it to the top, plenty of others don’t. Only 0.012 % of academy players make it to the Premier League. Therefore after dedicating their lives to the sport, most fall short of achieving their dreams.

The third episode of the United icon’s Amazon Prime docuseries analyses the enormous pressure young players have to deal with. It also touches on whether clubs offer the correct support to those who get released.

The episode focuses on Manchester City youth player Jeremy Wisten. In 2020, at just 18, he took his own life, two years after the Premier League champions let him go.

Ferdinand said, “There needs to be motivation. We were fortunate enough to have a round table with a few football clubs during the series, some declined, but many did come.

“It was refreshing to see some of them trying to put things in place to help young players and their mental health, coming into the club and when they leave – and everything in between,” he continued.

“You could look at it when they go on in and say ‘they’re too young’, but I think that it depends on the individual really,” he said.

“As a parent, you have to gauge where your kid’s at. Are they equipped to handle all of the pressures of going into a professional club and the demands that are put on them?”

Ferdinand went on to say, “It is a lot to withstand. The travel, the intensity, how serious it is from a young age. Can your kid deal with that?

“I’ve got two boys who are in an academy at the moment, and they came into it at a later age, mainly because I didn’t feel it was right for them at that time to go in so early.”

The footballing star concluded by pointing the finger at those in a position of power.

“There is still much work to be done, they know that.

“There needs to be something implemented by the authorities that demands that these processes are put in place for clubs, because we can’t have young players taking their own lives or falling into depression.”

Do these statistics indicate Cristiano Ronaldo is past his prime?