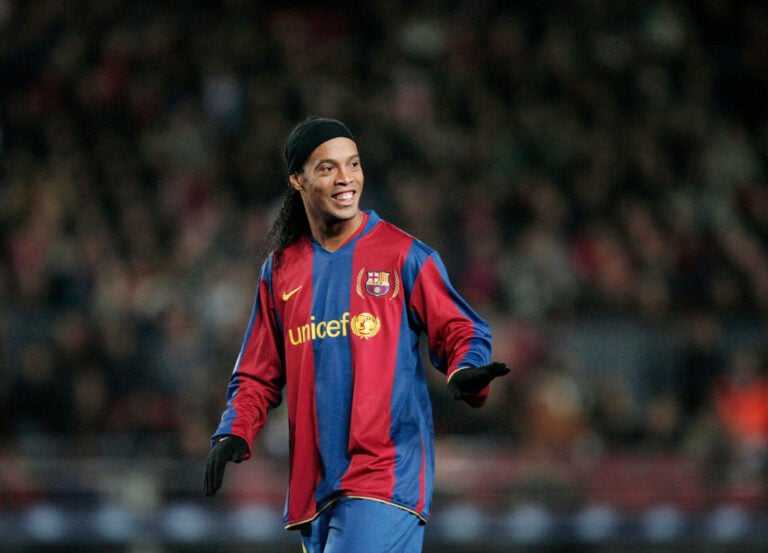 Ronaldinho is a name that sparks great memories for football fans, due to his fancy footwork and breathtaking moments.

The 2005 Ballon d’Or winner is undoubtedly one of the best footballers of all time. Ronaldinho always played with a smile, and his skills brought joy to football fans worldwide.

The Brazilian enjoyed the best years of his career at Barcelona, and as a result, he became a superstar. He plied his trade at the Camp Nou from 2003 to 2008, winning two La Liga titles and the 2006 Champions League.

In the 2005/06 season alone, Ronaldinho was unplayable. He recorded 26 goals and 24 assists in 45 appearances in all competitions.

Seven goals and five assists of that tally were achieved across 12 Champions League matches. The Spanish side defeated Arsenal in the final in Saint-Denis to lift the trophy.

Due to his success, Ronaldinho is well-placed to judge the Champions League’s best-ever players.

The Brazilian named his side in 2015. As most would expect, some big names are involved.

The likes of Paolo Maldini, Gianluigi Buffon and Roberto Carlos all feature, but there is one great missing – Cristiano Ronaldo.

Ronaldinho did choose Lionel Messi in his team, but Ronaldo’s absence is surprising.

In 2015, Ronaldo played for Real Madrid. At this point, Real had not yet achieved the incredible feat of retaining the Champions League in three successive years. That would have to wait until 2018.

Still, at this point, the Portuguese striker had won the competition twice with two different teams. Ronaldo lifted the Champions League with Manchester United in 2008, and then again with Real in 2014.

Because of his achievements, Cristiano Ronaldo is now regarded as one of the greatest players of all time. Since Ronaldinho named this XI in 2015, the Portuguese striker has become an icon.

Ronaldo has won the Champions League five times overall. He has also been awarded the Ballon d’Or six times.

He is also the competition’s all-time top goalscorer, with 141 goals. Due to his records, he would surely be a shoo-in if Ronaldinho were to pick his XI this year.

Here is the all-time Champions League XI of Ronaldinho in full, including the clubs for which each player featured in the competition up to 2015: