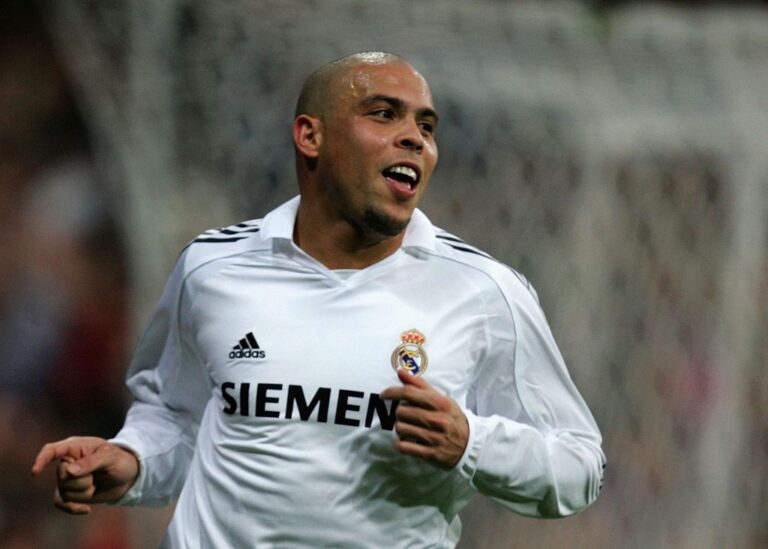 Former Real Madrid and Inter Milan striker Ronaldo is renowned as being one of the most naturally gifted footballers in history – meaning he has to be in the conversation for any all-time XI.

Football had never seen anything like the young Brazilian when he burst onto the European scene with PSV and Barcelona. Signed for Les Cules by Sir Bobby Robson, Ronaldo ripped up La Liga.

During his only season at the club, in 1996/97, Ronaldo smashed in 47 goals in 49 appearances in all competitions. But it wasn’t just the numbers that made Ronaldo special. It was how he played the game.

The Brazilian had the perfect balance of blistering pace, height, power and an innate ability to find the back of the net. He could score from anywhere, shoot with insane power and beat defenders at will.

Perhaps his greatest goal came against Spanish side Compostela in La Liga in October 1996.

Firstly, Ronaldo picked up the ball in his own half. He then shrugged off the advances of one defender who was pulling at his shirt, and set off running. What happened next was magical.

The striker powered forward, before switching the ball to his right foot and gliding sideways past two defenders. Now in the box, Ronaldo was off balance but still managed to coolly convert the ball past the goalkeeper. It is that good that Twitter flags it as sensitive content.

It can be argued that, were it not for two horrific knee injuries suffered at Inter Milan, Ronaldo could have been considered the greatest player in football history. That he still scored 350 senior goals, and had successful spells at Inter and Real Madrid, proves what an incredible talent he was.

Ronaldo named his all-time XI – and it is remarkable

Throughout his 18-year professional career, which started and ended in Brazil, Ronaldo played with and against some of the greatest players ever.

Back in 2016, in an interview with FATV, he was asked to name his dream XI. There were no restrictions on the team. Ronaldo could pick players he played with, alongside, or simply enjoyed watching. He could even pick himself (and yes, he did).

Amongst the notable selections is AC Milan and Italy legend Paolo Maldini at centre-back. Maldini played most of his club career at left-back. Unsurprisingly, like with everything else he did, the Italian transitioned to centre-back very easily in his later career. Picking him at centre-back in this team meant that Ronaldo could choose a former club and international team-mate in Roberto Carlos.

There is also no room for Cristiano Ronaldo in the team. However, this team was selected several years ago, so Ronaldo’s opinion may have changed.

There is a strong Real Madrid presence in the team, with Carlos, Fabio Cannavaro, Zinedine Zidane and Ronaldo himself all having played for the club at one stage in their careers.

It’s fair to say that the team, essentially, is unbeatable. Our only question mark would be Maradona and Messi tracking back. But who really cares when you’re probably scoring masses of goals a game?