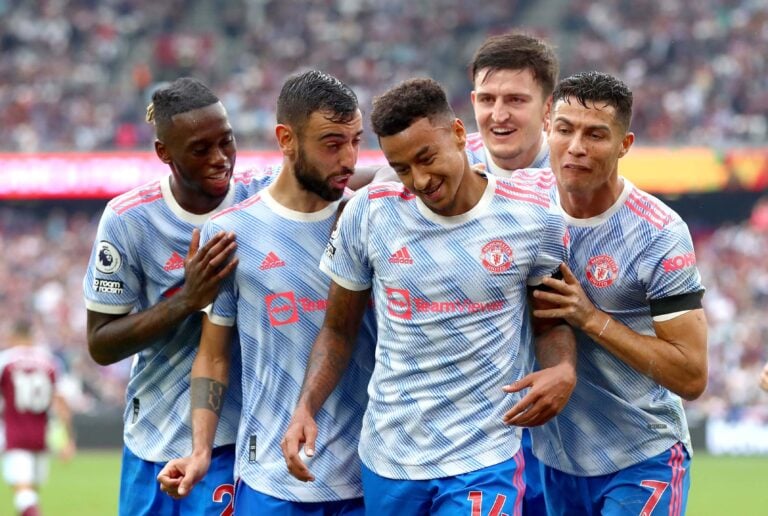 Manchester United‘s FIFA 22 ratings have been revealed, with Cristiano Ronaldo unsurprisingly topping the pile at 91 overall.

Ronaldo has, however, been downgraded by one overall stat point compared to last season, where he had a 92-rated card at Juventus.

His stats have been downgraded in five of the six main areas. The only exception is his shooting which, at 93, stays the same.

Ronaldo has also been confirmed as having a Ones to Watch card for the opening promo of FIFA 22, meaning users won’t be able to pack his rare gold item for a couple of weeks.

Who else is near the top of the United ratings list?

Behind the 36-year-old in the United ratings list is his Portugal team-mate, Bruno Fernandes.

The attacking midfielder has seen his overall increased by one to 88 after an impressive first full season with the Red Devils.

Another player to receive an overall upgrade of one is Paul Pogba. The French midfielder netted three goals and provided three assists last term, whilst he has started this campaign by providing a remarkable seven assists in five Premier League appearances. He is rated at 87 overall.

New signings Jadon Sancho and Raphael Varane, meanwhile, are rated at 86 overall. Both players have retained their starting ratings from FIFA 22.

Further down the list, Harry Maguire and Luke Shaw (both 84) have received upgrades after impressive seasons. Shaw won United’s Players’ Player of the Year award last season, whilst Maguire put in a number of key performances at centre back. Both men also excelled during Euro 2020.

Their England team-mate Marcus Rashford remains at 85, as does Uruguay forward Edinson Cavani.

Goalkeeper David de Gea – who has been tipped as a contender for the inaugural Team of the Week of FIFA 22 after saving a last-minute penalty in United’s 2-1 win over West Ham – has received an overall downgrade of one to an 84 rating.

(All ratings via Futbin)