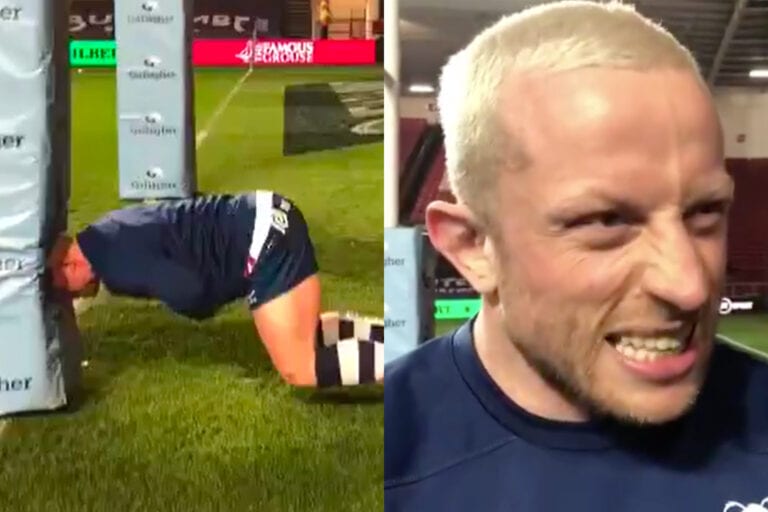 When an interview starts with a player’s head resting against a goal post, you know it’s probably going to be one to watch.

That’s exactly what happened when Bristol Bears prop Max Lahiff did an interview for the club’s Twitter account before their Premiership clash with Wasps last Friday.

After a few seconds of silence on the video after the interviewer approaches him, the questions begin.

When asked about the quality of Bristol’s next opponents, Wasps, he replied that “despite their injuries, they’ve got a team of real mavericks.”

Then the topic changed to his last performance. Lahiff explained: “I was running around, just talking to my ancestors.

“I was missing lungs. I was battling.com.

“You know, one of those real personal grind-outs. You’re just like ‘oh God, next phase, I can do it’, just all that inner monologue.”

Lahiff refers to the code as a “macabre sport of gladiatorial confrontation.”

He then adds that he is “looking forward to getting right in amongst it and intimate in the best kind of the way with the men from Wasps – canny foxes.”

When the discussion is wrapped up, the interviewer expresses an element of surprise at what he’s just heard over the two minutes.

The same can probably be said for most of us. The interview went down well on Twitter – and it would be great to see that sort of character displayed in interviews more often.

Lahiff similarly provides a consistent use of metaphors on his own Twitter account. Here are some of his best recent tweets:

Bristol did go on to defeat Wasps later that Friday by a scoreline of 37-20. A great evening all round for Lahiff, then.