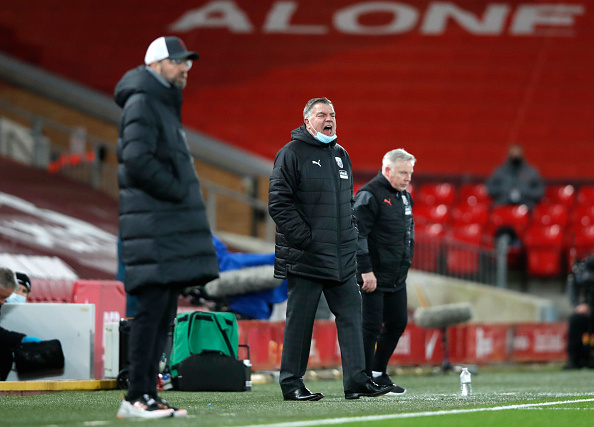 Sam Allardyce served up a ‘Big Sam’ classic last night as he masterminded a draw at the home of the Champions.

West Brom went 1-0 down after 12 minutes as Sadio Mane put Liverpool ahead. West Brom stayed in the game despite a Liverpool onslaught throughout the first half.

The away team were better in the second half as they made a few chances. While also staying strong defensively.

The baggies’ goal came on the 82nd minute as Semi Ajayi rose highest to head home the equaliser.

Liverpool pushed for a winner but could not find a way past West Brom or Sam Johnstone.

Jurgen Klopp was frustrated with his team’s performance, he told Sky Sports: “The problem we have is that West Brom deserved their point and that is our fault.”

“I don’t think anyone can expect that a team plays like West Brom in the first half, with a 6-4 or whatever it was.”

Allardyce was impressed with his sides performance, he told Sky Sports “I think the lads have shown a lot of grit and determination and organisation, and team spirit at a very difficult place.

Sam Allardyce also made a big claim, by saying: “I can easily do what Klopp is doing at Liverpool with some of the most expensive players. But he cannot do with these West Brom players what I did today.”

The draw meant that Sam Allardyce has now won more points (5) at Anfield since April 2017 than the ‘Big Six’ combined (4). This is a crazy stat shows that he has been Liverpool’s kryptonite over the past few seasons.

He has taken four different teams to Anfield since 2016 and have come away with at least a point each time.

Allardyce has been criticised in the past for playing ‘anti-football’. However, his results at Anfield show that he is one of the best at organising defensive units.

West Brom’s performance was trending on twitter with some different opinions on Allardyce’s style of play.

Some were positive reactions.

Others did not seem to be fans of Sam Allardyce’s tactics.

Whether you see it as a defensive masterclass or boring anti-football, at the end of the day West Brom picked a what could be a vital point

In a quick turn around ,West Brom face Leeds United at home tomorrow. The game kicks off at 18:00 and can be watched free on Amazon Prime.

The results against Liverpool are exactly what West Brom need if they are to stay up this season. With Big Sam at the helm, they may just have a chance.