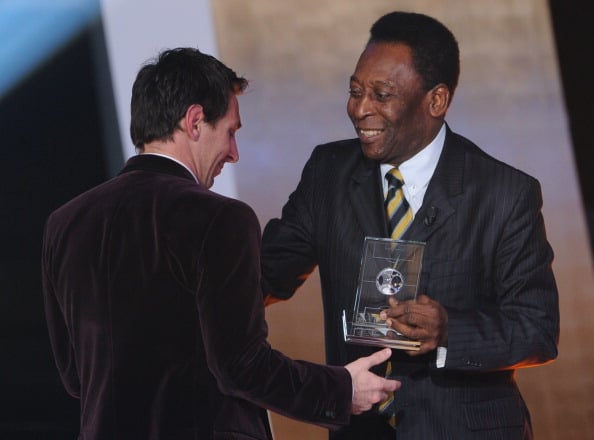 Last week news broke that Messi had achieved the remarkable feat of breaking the record for most goals at one club held by Pele.

A goal in a 3-0 win over Real Valladolid saw Messi score his 644th goal for the Catalan club.

The Argentine received plaudits from many across the footballing world.

Budweiser even sent out 644 bottles of beer to the 160 goal keepers Messi managed to score past on his way to the record.

However there has been a twist in the tale as Santos claim that Messi has not actually broke the record. So who hold the record Messi or Pele?

The Brazilian club claim that Lionel Messi is still 448 goals off Pele’s tally.

In a post by Santos on Instagram, the club said: “Pelé scored 1,091 goals for Santos. In the accounts of the specialized press, the King of Football scored 643 in competitions and the 448 goals scored in matches and friendly competitions were ostracized, as if they had less value than the others”

The club went on to say: “The 448 goals that today try to disqualify, were scored against the main clubs and teams of the season. América (Mexico) and Colo Colo (Chile) each suffered nine goals from Pelé. Internazionale Milan, one of the main teams in Europe in the 1960s, suffered eight more goals from the King. The list is immense and with participant’s weight: River Plate, Boca Juniors, Racing, Universidad de Chile, Real Madrid, Juventus, Lazio, Napoli, Benfica, and Anderlecht. Barcelona himself, where Messi now plays, was also a victim of Pelé: four goals, scored in four matches”

Do friendly goals count for Pele?

Friendlies and friendly tournaments does not usually count towards a players statistics. Santos however believe that Pele has been penalised because of this.

There is no doubt that friendly games may have been meant more to players in the Pele era. As players would have wanted to prove that they were the best in the continent and the world.

The list of European clubs Pele went on to score against is impressive as he got goals against some of Europe’s best. Including 8 goals against Inter Milan who were one of the best teams in Europe in the 60’s.

As well as Inter he got goals against Real Madrid and Benfica who up until 1965 were the only three teams to win the European cup.

Santos also made the point that Pele had scored 4 goals against Messi’s Barcelona.

There is no doubt about the goals against the clubs of this magnitude. However, some of his other friendly goals will have been against teams of a weaker calibre.

The debate has begun to heat up as many can not agree on whether Messi’s has broken the record.

The only way to keep everyone happy is to perhaps have two separate stats for two of the best of all time. And wonder how many goals would have these two got playing in the same team.