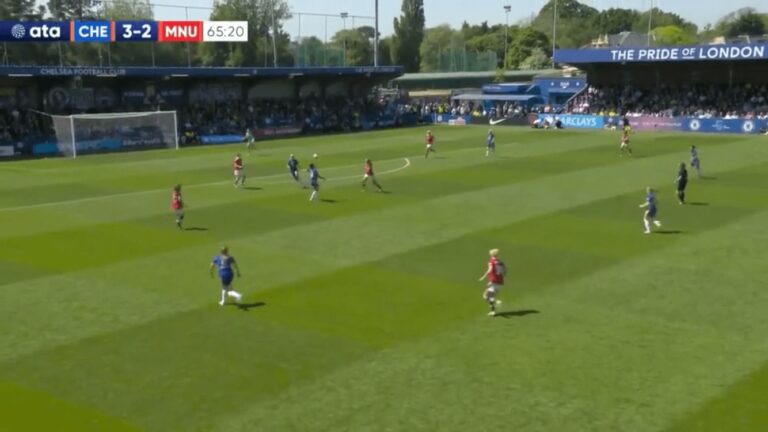 Chelsea have pipped Arsenal to the post after Sam Kerr scored an absolute screamer against Manchester United to win the Women’s Super League.

The London club have played at an immense standard all season, and now they can celebrate the fruits of their labour.

Upon reflection, ‘The Blues’ couldn’t have done much more. They won 18 of their 22 games and showcased a rich depth of talent within their squad.

Emma Hayes has guided the now five-time WSL Champions to incredible glory. But without the heroics of Kerr, the dreams of the squad could’ve come crashing down around them.

On May 8, they welcomed United to their southern stadium and participated in one of the best matches of the season. Knowing a victory would clinch the title, Chelsea started the game with a point to prove. But it was the visitors who took the lead after 13-minutes in the form of a Martha Thomas Header.

However, the favourites quickly hit back with Erin Cuthbert slotting home shortly after. But once again Chelsea took their eye off the ball and Ella Toone found the back of the net to put United back in front.

This disaster left The Blues with just one half to pick up the title. But obviously, this didn’t demoralise Kerr. She came out firing and instantly scored a stunning volley. This set the ball rolling, and Guro Reiten quickly pounced to put Chelsea in the ascendency for the first time in the match.

But the Londoners weren’t done yet, or more appropriately, Kerr wasn’t done yet.

Sam Kerr scores the goal of the season

In a moment reminiscent of Thierry Henry’s against Manchester United, Kerr channelled her entire career into one second of sporting genius.

From way outside the box, she controlled the ball on her chest and smashed it home, leaving Mary Earps helpless.

The incredible finish sent the crowd into raptures as they not only celebrated winning the league but also that they’d witnessed such an incredible piece of footballing magic.