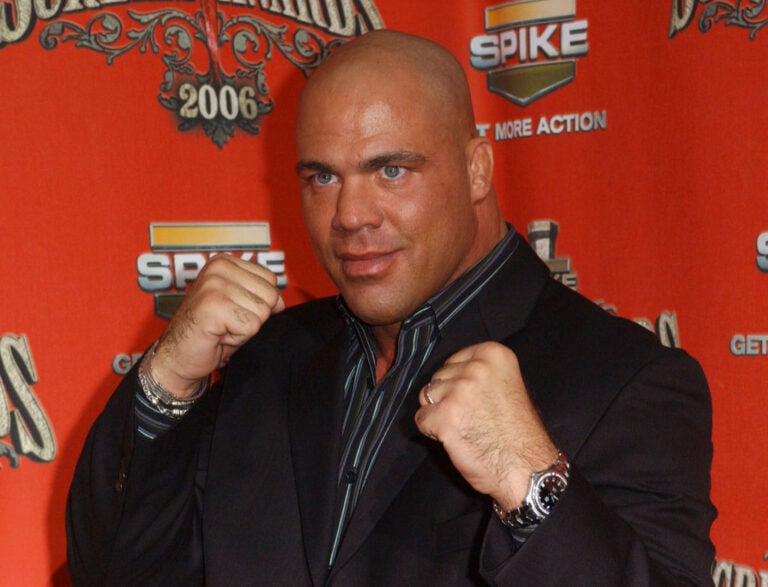 WWE star Kurt Angle has revealed that he turned down the UFC after they offered him a ten-fight deal in 1996.

In life, our decisions can dramatically affect where we end up. Had ‘The American Hero’ accepted a deal with the world’s premier MMA promotion, he might not have found himself in the position he is today.

Over the last 26 years, Angle has cemented his place among the greatest wrestlers of all time. After signing with Vince McMahon’s company, he climbed his way up the WWE ladder all the way to the very top. He captivated audiences on the mic, engaged in bitter rivalries and ultimately won five world titles.

Even after his competitive career came to an end, he continued to enthral the crowd with compelling storylines during his stint as the Raw General Manager. But before his days as an entertainer, he spent endless hours grinding on the mat in preparation for the Olympics.

In 1996, The Team USA representative struck gold in freestyle wrestling. This proved his ability to compete in combat sports at the highest level. In 2022, a transition to the UFC would’ve made perfect sense. But in the nineties, the landscape of the sport was very different.

Kurt Angle explains why he turned down The UFC

Over the years, several WWE icons have made the transition to MMA. The likes of Brock Lesnar and Bobby Lashley found huge success. But Angle had better credentials than both of them, suggesting he could’ve made it to the pinnacle of the game. However, in an interview with Chris Van Vliet, he revealed that the money on the table just wasn’t enough to twist his arm.

He continued: “So I had to pass on it, and I’d say about six, seven years later, it just exploded, because of Dana White, he did a tremendous thing reigniting the company. But I knew if I’d have done it right after the Olympics, I probably wouldn’t be in pro wrestling.”

Could things have been different for Kurt Angle?

We’ll never know for sure how far Angle could’ve gone in the UFC. But there is one way of looking at it that could provide some form of clarity.

In 1998, Paramount Pictures released a film entitled ‘Sliding Doors’, starring Gwyneth Paltrow. The concept revolved around the different paths our lives can take based on the tiniest of circumstances.

The film explores two separate realities of a woman who gets sacked from work. In the first, the main character, Helen, makes her train home and catches her boyfriend in the act with another woman. Whereas, in the alternative timeline, she misses the train and therefore remains unaware of the affair for the bulk of the film.

But regardless of whether she makes it to the platform or not, she ultimately falls in love with a new man at the end of the movie.

This indicates one thing. What’s meant to be is meant to be. If you’re going to find success, you’ll get there some way or another. Kurt Angle had all the talent and charisma to do whatever he wanted.

Yes, he triumphed in WWE but had he accepted the UFC’s offer, there’s no doubt he would have strapped the belt around his waist at some point.