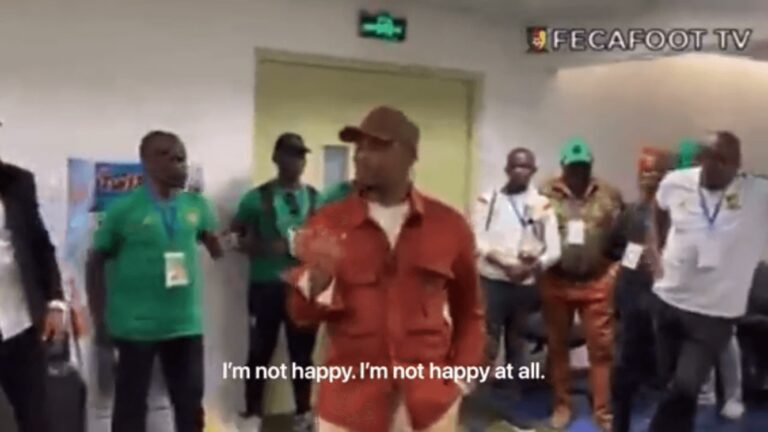 Footballing icon Samuel Eto’o has gone viral for tearing into the Cameroon squad following a disappointing performance against Burundi.

Throughout his storied career, the striking sensation proved himself as one of the great strikers of his generation. His dynamic movement and natural eye for goal saw him tear apart La Liga and Serie A. He showed his talent in the Premier League, too.

But his tremendous showings extend far beyond just the club game.

Eto’o always wore his heart on his sleeve when it came to representing his country. He bagged a whopping 56 goals in 118 appearances and won two Africa Cup of Nations titles. Post-retirement, he has continued to help the side in any way he can.

In December, he became the President of the Cameroon Football Federation (FECAFOOT).

Eto’o takes his role very seriously, and despite the African nation successfully qualifying for the World Cup, he wasn’t happy with their performance against Burundi on Thursday.

What the all-time leading scorer in AFCON and Cameroon international history doesn’t know about football isn’t worth knowing. Therefore, although Cameroon picked a 1-0 victory, he decided to impart some wisdom to his players.

In a passionate speech, he exclaimed: “I am not happy. I don’t care who you play against. You represent Cameroon. I am not happy at all.

“In my time, I missed the World Cup because I knew what problems I had. Those problems won’t repeat themselves while I’m president.

“Places in this team will be earned. Nobody, I repeat, nobody, has a place guaranteed in this team. You must do your job. Whoever comes here to wear this shirt must do the job, else he goes, and I will be happy to have the children play.”

He continued: “I sat where you are years ago. I know some of you are thinking, ‘He is stupid’.

“When we come here, it’s about Cameroon, guys. There’s nothing more beautiful than Cameroon for me. I will give my life for my country. I have great esteem for my country, and I shall arrive with or without you.

“If you want to be part of this journey, you must work. If it’s about what I saw out there today, I’m not sure any of you will be on the list. I need more because I dream to win the World Cup.

“All the problems I had as a player, won’t repeat themselves. The first objective is having a goodhearted group. I failed because that was absent even though we had great players. When this group will be happy together, we will win.”

Cameroon will kick off their World Cup campaign on November 17. They face Serbia, in a group that also features Brazil and Switzerland.