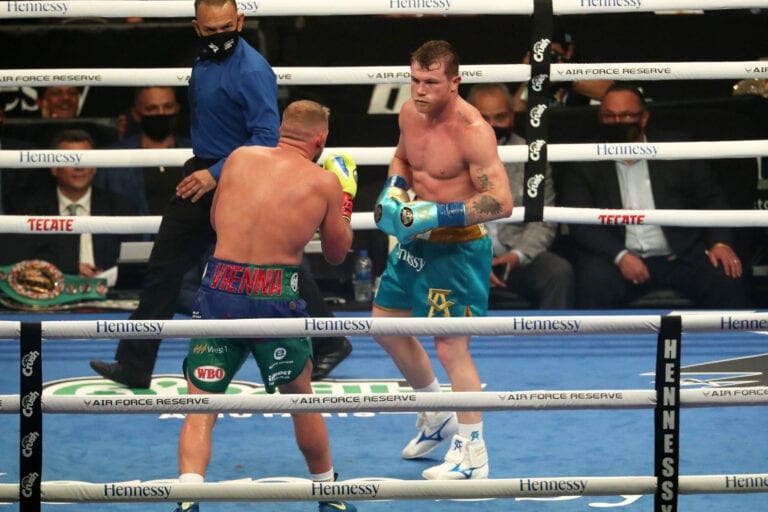 The scorecards from the Canelo Alvarez vs Billy Joe Saunders fight on Saturday night have been released.

Canelo and Saunders went to war this past weekend at AT&T Stadium in Texas with thousands of fans in attendance.

Prior to the stoppage, the general feeling was that Alvarez was winning the fight – though that proved to be irrelevant in the end.

The stoppage came courtesy of a significant eye injury to Saunders with the decision being made that he was unable to continue due to poor vision.

The official scorecards from the three judges have since been revealed, backing up that consensus that Alvarez was indeed leading the bout.

Two judges had Alvarez ahead 78-74 with the third giving Canelo a 77-75 advantage, meaning he had a 6-2 and 5-3 advantage in the eyes of Glenn Feldman, Tim Cheatham and Max DeLuca.

While it’s near-impossible to argue with Alvarez’s dominance, his rise to prominence hasn’t been without controversy when it comes to scorecards. There’s still an argument to this day regarding who the rightful victor was in his two fights with Gennady Golovkin, one of which he drew and the other he won.

Getting a decision over Alvarez was always going to be hard if Saunders was able to continue, though given the severity of his injury, it’s become quickly clear that staying on the stool was the right choice.

Following the fight, Eddie Hearn confirmed Saunders had suffered multiple fractures to the area around his eye and would require surgery.