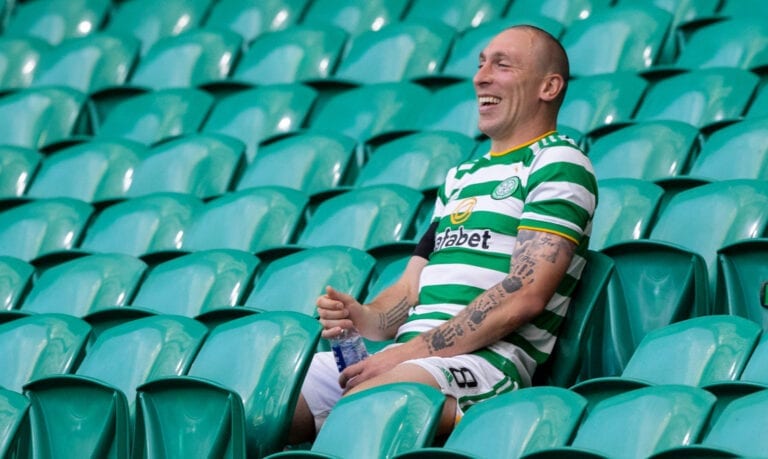 Scott Brown played his final home game for Celtic last night after 14 seasons at the club – and his post-match interview started off in hilarious fashion.

Celtic beat St. Johnstone 4-0 at Celtic Park, with Brown playing 63 minutes and providing the assist for Odsonne Edouard’s goal midway through the first half with a superb cross-field pass.

He has made over 400 appearances for the club, captaining the side for 11 years.

But last night was his last home appearance for Celtic, as he prepares to become Aberdeen player-coach from next season.

Prior to the game, he had reflected on some of his greatest moments in a Hoops shirt and his final game at the ground he has called home for 14 years.

His post-match interview after the St. Johnstone victory was conducted in a similar fashion, but got off to a shaky start.

Speaking to Celtic TV, Brown – not knowing that they had gone live – said: “Play that song again, it’s a great tune. Just get Scooter on… f*** me!”

What made it even better was the immediate glance around and subsequent realisation that they were indeed live.

After a few seconds, the interview did commence, and Brown praised the Celtic fans for their support over the years.

He said: “It’s a special club with special fans and it’s just sad that they’re not here today for me to say goodbye to them in person.

“Here’s hoping I get to come here with Aberdeen next season and I can say goodbye to them then.

“My message to the fans is: thanks for your support and your patience.

“The main thing was, I came here to win trophies. Celtic fans expect trophies. We’ve done that, although it’s been a disappointing season this season.

“But believe me, Celtic will be back and challenging next season.”